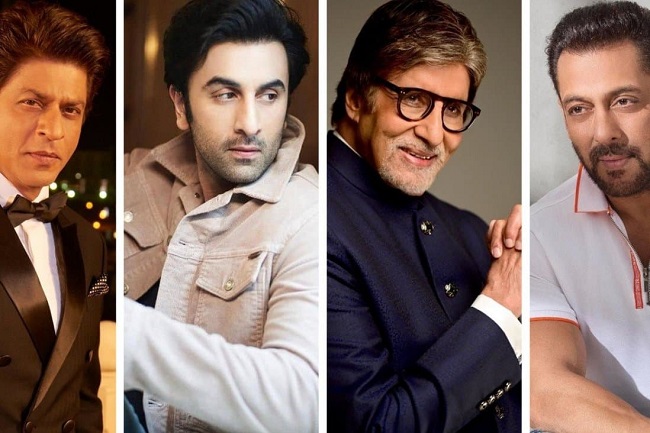 Here is a list of the top 10 highest-paid celebrities in India.

Shah Rukh Khan is one of the highest-paid celebrities in India. He is popular by the name Badshah and the king of romance. The actor has been a part of around 180 films under his name. He has a huge fan following of the time.

Shah Rukh Khan is a 55 years old Indian Bollywood actor where he will be charging US$13Million for his film. It is an upcoming film under Yash Raj Films Banner named Pathan. He rose his fame with films like Dilwale Dulhaniya Le Jayenge, Kal Ho Na Ho, Bazigaar, Don, and many more.

Amitabh Bachchan is a legendary actor popular during the 70s in Indian cinema. He is one of the most popular actors of the time where he has given many hits and successful films.

There are recently rolled outs of the actor Piku, Pink, Thugs of Hindustan, Paa, and many more. He is also gearing for his upcoming film Intern.

Apart from this he also holds 5 luxurious bungalows and 2 flats in Juhu.

Salman Khan is a popular actor in Indian Bollywood. He is an actor from the 90s who has had a huge fan following for the time. He rose his fame with the films like Hum Aapke Hain Kaun, Hum Dil De Chuke Saman, and many more.

He is currently a part of the show Bigg Boss on Colors TV where he is the host for the show. He also owns a company Salman Khan Films which has produced under his banner.

Akshay Kumar is one of the richest actors where he is popular for his films like Hey Baby, Rustom, Khiladi 786, and many more.

He is also a lead actor in the popular film Housefull which is a romcom. The upcoming rollout of the actor is the Prithviraj.

He is currently the highest-paid actor in India also one of few owning a private Jet.

Aamir Khan is one of the Mr. Perfectionists in the Bollywood industry. He is popular for rolling out a single film in Bollywood with great perfection.

He is popular for the films like PK, Secret Superstar, 3 idiots, Dhoom 3, and many more.

He is also popular as the host for the television show Satyamev Jayate on Star Plus which was a talk show on social issues.

Kamal Hassan is a popular Tamil superstar who rose his fame in India and also he is known for the roles like Biwi No 1, Chachi 420, Ramji Londonwaley, Mumbai Express in Bollywood.

He has also been the host for the show Bigg Boss Tamil for Season 4. He is popular in the Tamil Tollywood industry where he has given many hit shows.

Shahid Kapoor is a popular Bollywood actor who rose his fame with Bollywood Movies. He is a 40 years old actor where he has given many hit shows to date.

A few to name films of the actor are Mausam, Kabir Singh, Padmavaat, Jab We Met, and many more. He has various brand endorsements to his name like Reebok, Tommy Hilfiger, Brut, and many more.

Hrithik is a popular actor where he known for films like Dhoom, Krrish, War, Kabhie Khushi Kabhi Gham, Kaho Na Pyaar Hai, and much more.

the various brand endorsement for the actor is HRX and he is all set to be a part of the film Ramayana opposite Ranbir Singh.

Ranbir Kapoor is one of the most favorite actors in Bollywood where he has risen his fame with Bollywood films. He has been a part of the films like Yeh Jawaani Hai Deewani, Barfi, Ae Dil Hai Mushkil, Sanju, and many more.

He has various brand endorsements to his name like Renault, Pepsi, Flipkart, Panasonic, Asain Paints, and many more.

Saif is a popular actor in the Bollywood industry and also Nawab of India. He is the owner of the Pataudi palace in India. Saif Ali Khan rose his fame with the films like Love Aaj Kaal, Cocktail, Bunty Aur Babli, and many more.

He is also a owner of production houses like Illuminati Films and Black Knight Films.