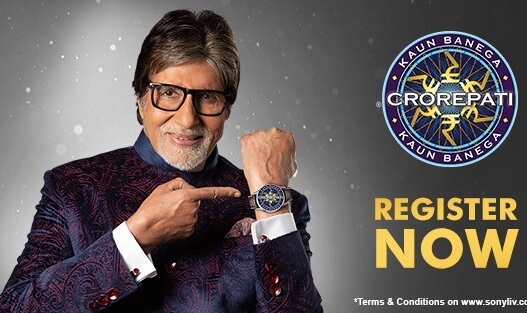 Kaun Banega Crorepati is a biggest television game show on the Indian television network. After completing 9th season successfully. The officials of the show are all set to come up with the new season of the show. The registration and auditions for the show are starting from 6th June at 8:30 PM. So, if you want to participant in the show stay alerted for the registration and auditions for the show. Check out the KBC 2018 Auditions, Registration Questions and How to do Kaun Banega Crorepati season 10 Registration Online.

The very first version of the Kaun Banega Crorepati who want to become a millionaire was aired on 4th September 1998 in the united kingdom. The franchise was first created by David Briggs, Steve Knight, and Mike Whitehill. And originally presented by the Chris Tarrant. Since 11th February 2014, this television game show was ended.

CLICK HERE: To Online Registration for the Kaun Banega Crorepati Season 10 through Apps.

What are the different modes of registration? You can Register Through IVR and short code for sending SMS. Check the following details of the Registration.

In this Game show for the participation, there are three processes. In the first round, contestants will select randomly by a computer. The second round selected contestants will be called through their registered mobile number. In the final round, shortlist candidate will come on the show. There is no registration fee for anyone to participate in it other than the SMS or IVR call charges.

So participants age must require 18 years and above. Also if you want to participate in the game tv show you have to Indian nationality. KBC 2018 Auditions and Registration Questions will broadcast on SONY TV as well on SonyLiv apps and Website.

If you missed the Registration question, hen it will be mailed to your registered email id. Not only that but also to give your answer SMS, IVR. In the first round, the participants selected by the computer randomly. In the second round, the selected participant’s will received the phone call for walking audition. After that, the fastest finger round and the lucky winner get the chance to sit on the hot seat in front of Amitabh Bachchan.

Disclaimer: AuditionForm is not directly or indirectly associated with the show or the Channel. We just provide auditions information based on respective sources. Participation in Kaun Banega Crorepati is free of cost and all viewers/participants are requested to take caution and report against any person who demands money for the purpose of participation.