Raja Ranichi Ga Jodi to be remade in Gujarati 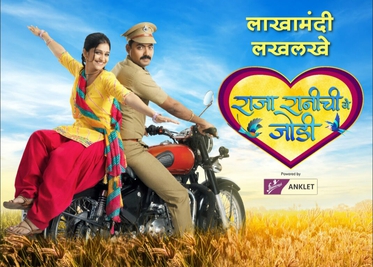 Raja Rani Chi ga Jodi is one of the popular TV shows on the Marathi television network. The TV show broadcasts on the Colors Marathi. And it has received a huge amount of positive response from the fans. Now according to exclusive sources, Raja Rani Chi Ga Jodi will be re-made in other regional languages very soon. It is expected that the TV show will be remade in the Gujarati language. check out complete details about it below.

Raja Ranichi Ga Jodi To Be Remade In Gujarati:

The Gujarati remix of the Raja Rani Chi Ga Jodi is titled as Sorath Ni Mrs. Singham. The leading actress of Raja Rani Chi Ga Jodi, Shivani Sonar has made an official announcement of it on her social media. The actress confirms the news. that she is very proud and excited to see the remake of this TV show. She also mentions that it’s a proud moment for the entire team.

Raja Rani Chi Ga Jodi features a very interesting love Story. The TV show revolves around a young police officer and a teenage girl. police officer Ranjeet and Sanjivani falls in love. and they have to marry each other under unfortunate circumstances. but the situation becomes worse when Ranjeet and his family find out the Sanjivni’s is real age.

The Gujarati version of the TV show will also be featuring talented actors. more updates about the star cast and starting date of the show will update on the page very soon.

Stay tuned with us to get the latest updates from new TV shows. Also, don’t forget to check out the addition of dates of upcoming television reality shows.