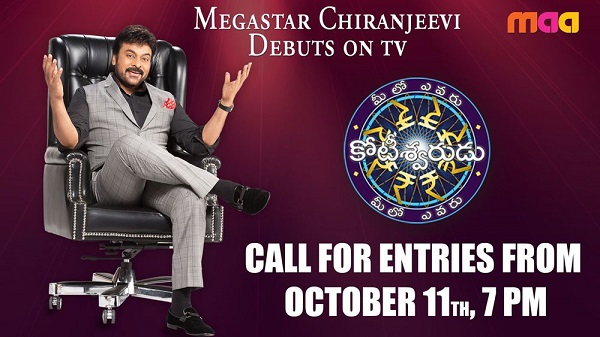 Previous all season of this game show was hosted by Telugu actor Nagarjuna. But this time, Meelo Evaru Koteeswarudu Season 4 will host by Chiranjeevi. MEK season 4 Question number 1 is Released on 11 October 2016. Anyone who is an Indian citizen, residing in India

Participants can be completed 18 Years Old

Who has made it once to the Fastest Finger First round of MEK – Season 1, Season 2 or Season 3 will not be eligible to participate in MEK – Season 4

When Will MEK4 Registration Open?

Registration lines (SMS – messaging only) are open from 19:00:00 hrs on Oct 11, 2016, when the first question goes on air, for all viewers. The schedule of on-air registration questions during this period will be as below

Subscribers of Airtel/ Idea/ Reliance/ TATA/ Vodafone can send in their SMS’s to 57827. The sending format is mentioned below.

All registration through SMSs needs to be in the following format: “MEK ”. For e.g.: If the correct answer to the question aired is “An” according to You. You are 21 years and 10 months old and are a male; you are required to send “MEK A 21 M”. to 57827

Scheduled to start : Meelo Evaru Koteeswarudu Season 4 will be air on MAA TV channels From Monday to Thursday at 8 :30 PM to 9:30 PM.

Here can get more about the auditions and Registrations Terms & Conditions, Read in English T&C or Telugu T&C

MEK will have many surprising, fun-filled and human interest elements. The show has had its fair share of success after being adapted into various regional languages and it’s a show in which knowledge can help earn big prize money. By answering each question in the money tree, any ordinary person can earn life changing money of Rs. 1 Crore.