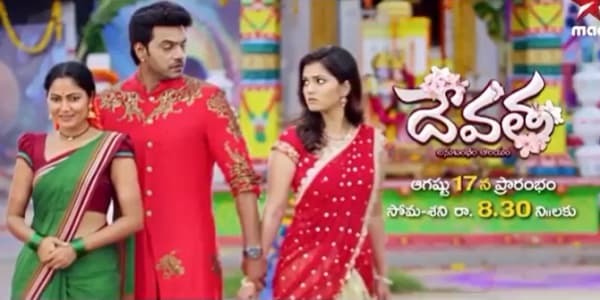 Popular Telugu TV network Star Maa is gearing up to launch a new TV show very soon. The upcoming TV shows on the channel are titled Devatha. The promo of the show is out. And fans are extremely excited to watch this new show on the channel. Check out the complete Star Maa Devatha Starting Date, Cast, Promo. To find out more information related to the broadcasting schedule of the show.

Star Mas Devatha will have a very interesting plot. It will be a family drama. The TV show is going to feature the story of a village girl.

Recently channel launched the new promo of Devatha. So the official starting date of the show Star Maa’s new show Devatha is out. It will hit TV screens o the 17th of August. The TV show will broadcast from Monday to Friday at 8:30 PM.

You can also catch the online telecast of the show. Hotstar’s official website and the app will provide its online broadcast. You can download Hotstar’s app from the Google Play Store.

This upcoming TV show is going to feature Suhasini in the lead role. Suhasini will play the role of a daring and dashing village girl, who can even challenge the strongest man in the village.

While it will also feature other talented actors in pivotal roles. The new promo introduces male lead of the show Aditya Krishna. The names of the rest of the cast members of the show will update on the page very soon.

Suhasini was last seen in popular daily soap Girija Kalyanam. She made her debut on TV screens which show Aparanji.

Stick around here to get the latest updates from the new show. Also, don’t forget to check out audition updates of upcoming television reality shows.