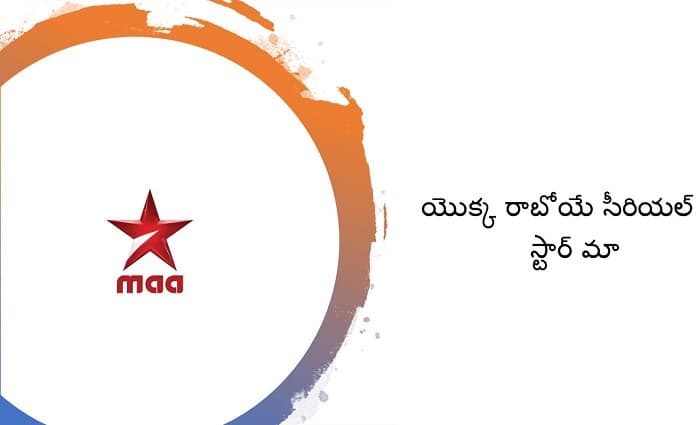 Star Maa is one of the leading Telugu entertainment channels on an Indian television network. The channel has given many entertaining and amazing shows to date. Star Maa Upcoming Shows/Serial list, Daily Schedule 2020, Timing.

There are also various reality shows telecasting on the channel. Here are complete details about the Upcoming shows on Star Maa. Also, check out the complete schedule of Star Maa here on this page.

Super Singer is a singing reality show. The show will be coming soon on the channel. The show provides a platform for all the kids who have singing talent in them.

The audition and registration process for the show are open now. If you think your kid has the singing talent in them Super Singer of Star Maa is a stage.

C/O Anasuya is the new and upcoming show on the channel Star Maa. The show is going to have an unique story line. It is about a strict mother who has two daughter both quite different in nature. One daughter is happy and bright while the other one is complete opposite to the first one.

Other details such as telecasting time, telecasting days, etc will be available on the website soon after an official confirmation from the sources.

The story of the show is about a woman Maheshwari. She falls in love with the Surya who is a simple and sweet guy from the middle-class family. But later tables turn when she finds out that Surya is not like he seems to be

Bigg Boss is one of the most controversial show on Indian entertainment television network. It is a very popular show where contestant are in the Bigg Boss house and compete for the survival in the house.

Kasturi is a story based on the young woman who faces various ups and downs in her life. She is in search of her biological father and wants justice for her mother.

The show has Aishwarya Pisse and Varsha in the roles.

The story of the show is about Rukmini who will be dedicating her life in caring for her family. The lady forgets her dreams after she giving all her time for her family

The story of the show is about the A mother, a wife, a daughter-in-law. It is about the Tulsi who has only the about identities of her. Tulsi decides to rediscover herself when all her these turn their back for her.

The story of the show is about the Deepa. Deepa is a dark skinned girl and she is ill treated by her sister. Her sister will be fair and beautiful. Deepa gets married to Dr Karthik however, she has to struggle a lot for living a happy married life.

It is about the Raghu Ram who own a department store and he has four younger brothers.

He is married to Seetha. And she decides not to have children of her as she will be taking care for her brothers-in-law along with her husband.

The story is about the woman who gets married opposite to her will. As she wanted her younger sister who is her step sister to marry the man of her dreams

The story of the show is about the girl child who is actually unwanted girl. The family was wanting to have a son. However, she has to face all the odds.

The story is about the young girl who is very talented in mathematics. She starts her search for her father when she comes to know that he is alive.

Star Maa is giving us amazing shows to date. Now you can also enjoy the shows of Star Maa on the popular digital platform Disney+ Hotstar.

Subscribe to the Disney+ Hotstar App now and enjoy the shows of Star Maa before TV.