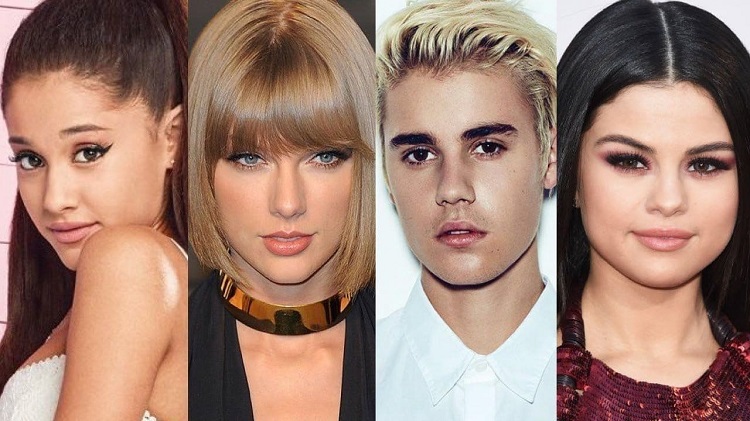 So today we are going to talk about the top 10 best singers in the world. These top 10 best singers are not only decided based on their talent but their album sales, records and chart position, and Spotify subscribers are also considered. Check Top 10 Best Singers In The World.

He is a Canadian singer, songwriter, and record producer. He has won three Grammy Awards, five American Music Awards, nineteen Billboard Music Awards, two MTV Video Music Awards, fifteen Juno Awards, and an Academy Award nomination. His Networth’s is around 100 million. The singer has released a number of hit songs. And has around 35 million followers. While Blinding Lights, Can’t Feel My face, Earned It, The Hills and Wicked Games are his biggest hit songs ever.

Justin Biber has 204 million Instagram followers. While his net worth is around 285 million in 2021. In recent years his songs like Peaches, Holy, Hold on, Stay are a huge hit.

Ariana Grande has 276 Million Instagram followers. And her Networth is around 180 million dollars. The singer has a huge fan base. She has a long list of hit songs and several sell-out tours.

Taylor Swift is creating a huge amount of buzz among fans because of her All Too Well short movie. She has won a number of hit Grammy awards. She has 185 million followers. Her net worth is 365 Million dollars.

Bad Bunny is a Puerto Rican rapper. his net worth is around 8 million in 2021. While some of his hit songs are Mia, Te Bote, Solo De Mi.

Ed Sheran has 35.5 Million Instagram followers. And his Networth is around 200 million dollars. The singer has won a number of awards. and recently he collaborated with BTS for the Permission of Dance Song. Shape Of You, Happier, Thinking Out Loud and many more are his top charter song.

Dua Lipa is an English Songwriter and Singer. He Net Worth is around 25 Million. Levitating, Cold Hart, New rules are some of her big hits.

Drake has 96.3 Million Instagram followers. And his Networth is around 200 million dollars. God’s Plan, One Dance, Toosie Slide, In My Feelings and the list goes on are his hit songs.

Billie Eilish has 96 Million Instagram followers. And her Networth is around 25 million dollars. She has a long list of hit songs and several sell-out tours.

BTS is one of the top boy bands in the world. The Boyband has set multiple records on youtube, Spotify, and many more. They have 52 Million followers on Instagram. around 100 Million is their Networth. They have released a number of chart-topping songs.