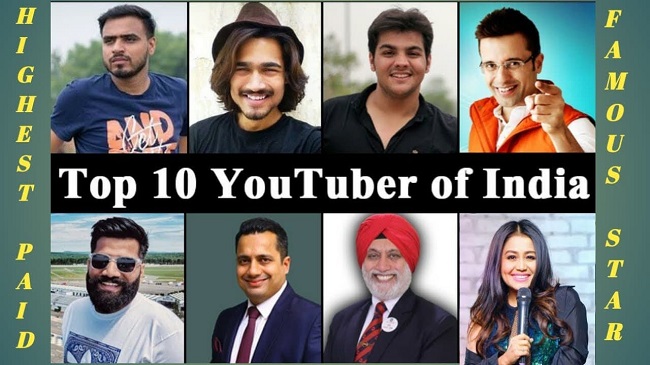 Check out more details about the Top 10 richest YouTubers in India.

Gaurav is a popular YouTuber also known as a Technical Guruji he has his base in the United Arab Emirates. He has been featured in Forbes India’s under 30 lists.

He also supplies security systems equipment to the Dubai Police.

Sandeep Maheshwari is a motivational speaker where is also an entrepreneur. He has 21 million subscribers to his YouTube channel. The total net worth of the speaker is around Rs. 3 crores.

Amit Badana is a YouTuber from Delhi who has in total of 22 Million subscribers on YouTube. He is also has a huge fan following on Instagram and Facebook. The YouTuber is a lawyer from Delhi.

He also recently created a video with his friends and created a Dubmash. The video went on viral within a few moments and he came up with a YouTube channel Amit Bhadana.

Nisha is an Indian chef where she is also a restaurant consultant. He has a YouTube channel where she posts her Cookery videos and different recipes.

She started her channel in 2017 where she has also received the Social Media Summit and Awards 2017.

He has two different YouTube channels like CarryisLive where he posts live streams of gaming and all. Also, he often posts hilarious videos. He has also been a part of the Forbes 30 Under 30 Asia List.

Ashish Chanchlani is a popular Youtuber/ YouTube VLogger where his net worth is estimated around $4 Million. He posted his first video on YouTube in 2014 after which he never set back and has a huge fan following.

He has also appeared on television screens in the popular show Pyar tune Kya Kiya in 2016. He has 6.7 Million followers on Instagram and 21.3 Million subscribers to his YouTube channel.

Bhuvan Bam is a popular Youtuber where his channel name is BB Ki Vines. He is the first-ever content creator in Indian who crosses 10 million subscribers on YouTube.

He has over 20 million subscribers on YouTube and 11 Million Followers on Instagram. The net worth of the YouTuber Bhuvan Bam is around Rs. 22 crores.

Harsh Beniwal is a popular YouTube and YouTube VLogger in India. He is a 25 years old Youtuber where he has 13.4 million subscribers. Harsh is a 1996 born YouTuber where his net worth is around Rs. 16 crores.

Emiway Bantai is a stage name of Bilal Shaikh however he is popular with the name YouTube name Emiway Bantai. He is a popular rapper, lyrists and entertainer.

He is popular with the debut song Glint Lock which he uploaded on YouTube in 2013.