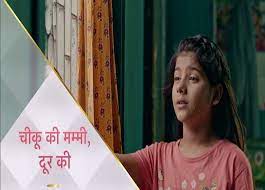 Sameer is seen playing the piano in the Saturday episode of Nilanjana Purkayasstha and Herumb Khot’s “Chikoo Ki Mummy Durr Kei.” Pushpa, his mother, is relieved that she has reclaimed her son thanks to Chikoo. When the cops arrive at their residence to take Chikoo’s photographs, she informs them that she was taken by her relatives. Gajak questions her about why she lied, and she responds that if Chikoo had a family, they would have filed a missing report, but because no one has complained about her, she is an orphan. She assures him that he will soon see that lying is only benefiting them.

Chikoo is later seen sitting in front of the mirror, pondering her name. Pushpa approaches her and introduces herself as Archie Khetan, her granddaughter. Chikoo is overjoyed to learn this and inquires about Sameer, to which Pushpa responds that he is her father. Sameer discovers Chikoo calling herself Archie while she is joyfully dancing. He inquires as to why Pushpa lied to her. She explains that it is for the sake of their family, as well as Chikoo’s, as she has no children of her own.

Meanwhile, Nupur informs Milind that she will search for Chikoo and will give up only when she has exhausted all other options.

Pushpa will urge Sameer in the next episodes that they must adopt Chikoo as their family and give her Archie’s identity. Sameer is on board with it. Nupur later shows up at Sameer’s house with a photograph of Chikoo and asks if he has seen her. Chikoo then calls for Sameer, and Nupur recognizes Chikoo’s voice. Keep watching the show to find out what happens next.