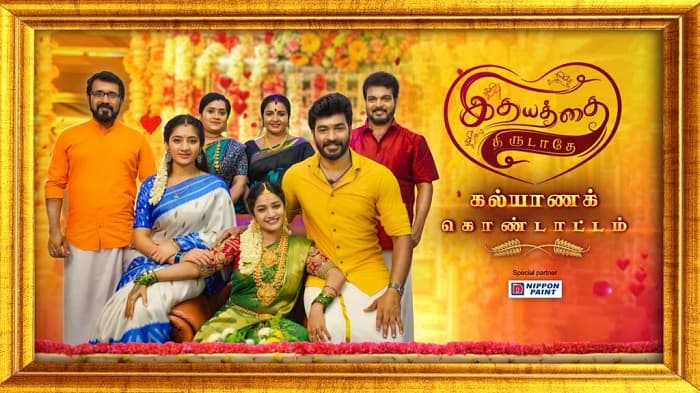 Chennai 19th April 2021: Colors Tamil’s much-loved show Idhayathai Thirudathey – special partnered by Nippon Paint, has captured the mind of the audience with a compelling storyline, is now geared up for a grand wedding on the show. To make it more exciting, the special episode of Idhayathai Thirudathey is set to bring together its favorite couple Shiva-Sahana, alongside celebrated couples from its popular fiction shows- Sillunu Oru Kaadhal and Managalaya Sandhosam, under the same roof, making it a memorable occasion. To be telecasted on 19th April 2021 from 7:00 PM to 9:30 PM, the celebration will also feature famous comedian Bava Lakshman and charming Vaishali Thaniga, playing cameo roles for the first time on the show.

In tune with the theme of the show, the special episode of Idhayathai Thirudathey will showcase the grand wedding of Shiva’s sister Aishwarya. The wedding will be an intriguing series of events filled with drama, emotions and entertainment. The grandeur will further leave the audience mesmerized with peppy dance performances by artists from Colors Tamil’s popular fiction shows, making it an unforgettable experience for one and all.

Commenting on his cameo, actor-comedian, Bava Lakshman said, ” It gives me immense joy to be part of Colors Tamil for the very first time. I am beyond thrilled for my cameo in an acclaimed show like Idhayathai Thirudathey. My cameo in the show will add a refreshing twist by bringing humor and liveliness to the occasion. I thoroughly enjoyed playing the cameo and, I hope that the audience will also enjoy my performance.”

Commenting on her cameo appearance, actress Vaishali Thaniga said, “I am thrilled and excited to be part of Colors Tamil’s prominent show Idhayathai Thirudathey. I am certain that my role will entertain the audience, as it brings further drama and twist to the show. I completely enjoyed working with the talented cast and crew of the show and, I hope that the audience will find an instant connection with my character.”