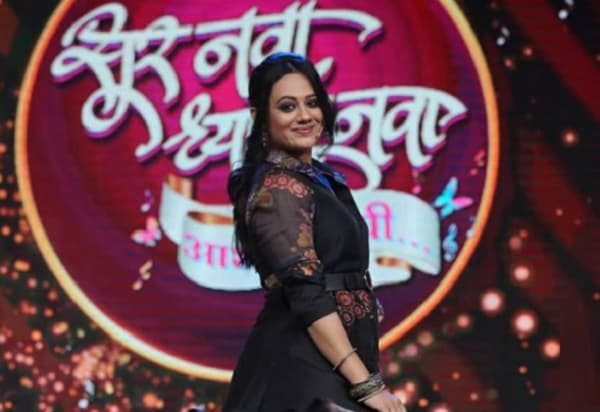 Sur Nava Dhyas Nava is one of the most popular Indian Television reality show in Maharashtra. The TV show recently released its first episode. and it has been getting a lot of positive responses from fans. The singing television reality show is being hosted the one of the popular and talented film actress Spruha Joshi. recently she expressed thoughts on hosting this TV show. Check out complete details about Sur Nava Dhyas Nava 2021 Host Name.

This brand new season of the show is women-centric. It features female singers across the state. While prominent singers like Mahesh Kale and Avdhut Gupte are judging this TV show. Sur Nava Dhyas Nava completed their various Seasons successfully. and throughout this journey, Spruha Joshi has been hosting the stinging television reality show. she has a huge fan following. in an exclusive interview with ETimes Express, she shared what it’s been like to associate with reality show Sur Nava Dhyas Nava.

She said “I am so happy that I have been hosting the show for the last three seasons. I am really delighted to host Sur Nava Dhyas Nava again. It’s been a journey for me also. I am quite excited about this new season. because this is a woman’s Special Season. I actually motivate everyone on the set and also backstage and that gives me positive energy.”

She also added “I have never taken the pressure of hosting. because I feel we all work as a family. Also, I feel I should feel comfortable at hosting first. then only the show and contestants won’t feel the pressure.”

She also added that the set of Sur Nava Dhyas Nava is very positive. Everyone is very supportive. And she considered herself blessed to be part of the TV show

The Online broadcast of the show is available on Voot’s official website and app. You can download the Voot app from the Google Play Store and app store.