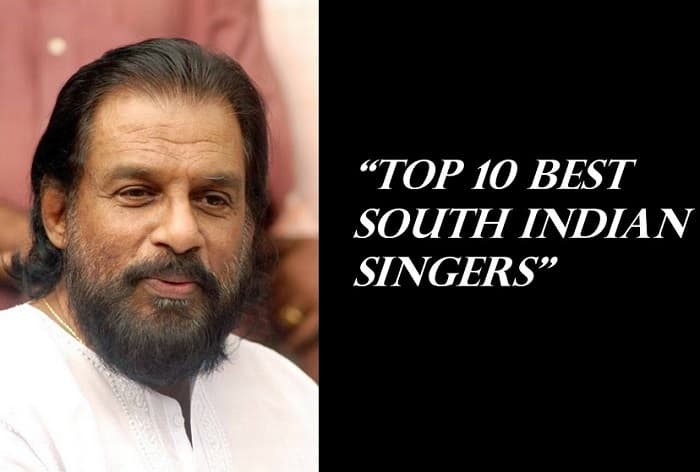 Singing is a talent with which you can win the hearts of many. It speaks out all your emotions the happy, sad, everything. One can even convey their emotions with the help of a song. Many popular singers in India, but in this blog going to write about the Top 10 Best South Indian Singers, who can make us proud to be Indian

K. J. Yesudas full name is Kattassery Joseph Yesudas. He is a musician and playback singer who sings Indian devotional, classical, etc songs. K.J. Yesudas sings not only in one language but in many other languages like Malayalam, Tamil, Hindi, Kannada, Odia, Bengali, Telugu, Arabic, Latin, Russian, English, and many more.

He is one of the greatest singers who has won the National Film Award in a record eight-time.

Hariharan is a popular singer who sings as a playback singer, bhajan, ghazal, etc. He sings in many regional languages like Telugu, Malayalam, Marathi, Tamil, Hindi, Bhojpuri.

He has won the National Award twice. Not only this he has been honored with the most prestigious award Padma Shri by the Government of India. He is one of the most versatile singers.

His debut song is “Ajeeb Sa neha Mujh Par Guzar gaya yaaron”. Not only this he has also been the judge of the popular singing reality show Surya Super Singer, Super Star Junior 5, Sa Re Ga Ma Pa, etc.

His full name is Sripathi Panditaradhyula Balasubrahmanyam who is a playback singer, director, actor, dubbing artist. He sings songs in many regional languages like Telugu, Tamil, Hindi, Kannada, Malayalam, etc.

He has recorded songs in 16 languages. S.P. Balasubrahmanyam has 6 National Film Awards for Best Male Playback Singer. Not only this he is been awarded many awards.

He is honored with the Padma Shri in 2001 and Padma Bhushan in the year 2011 by the Government of India.

Sistla Janaki is one of the most versatile singers from the south industry. She is very popular for her work in the cinema. She is a playback singer and a music composer. S. Janaki has recorded over 48,000 songs in her career.

Krishnan Nair Shantakumari Chithra is a playback singer and Carnatic musician. She sings various Indian classical, devotional music. She has recorded over 25,000 songs and more.

Pulapaka Susheela is a playback singer. She is a very popular singer with who has sung song in many languages. In her career she has sung for over 50,000 songs in various languages like Telugu, Tamil, Kannada, Malayalam, Hindi, Bengali, Sanskrit, Tulu, and many more.

Her name is recorded in the Guinness Book of World Records where she is performing a record number of songs in different Indian languages. Also, she has many awards for her work in the music industry.

Ghantasala Venkateswara Rao is a playback singer, film composer. He has his work in the field of cinema. He is honored with the Padma Shri by the Government of India.

Thoguluva Meenatchi Iyenger Soundararajan is full of T. M. Soundararajan. He is a playback singer and Carnatic musician.

He has recorded songs in many regional languages like Tamil, Hindi, Malayalam, Telugu, Kannada, etc.

Shreya Ghoshal is a singer, composer, music producer. She is the one who is ruling the Bollywood industry too. Shreya has given many hit songs in the industry. She has won many awards for his singing. She sings in many languages.

Shreya Ghoshal is the winner of the popular singing reality show Sa Re Ga Ma Pa. A few to name her songs are Bairi Piya, Ghar More Pardesiya, Mohe Rang Do Laal, and many more.

Sadhana Sargam is a popular singer. She has done work in the Hindi and Tamil industries. Sadhana Sargam has won many awards in her career for her work in singing. She is awarded the ‘ Lata Mangeshkar Award’ from the Government of Madhya Pradesh.

For more recent updates about the Indian entertainment industry and Singing Auditions news stay tuned with us..!!