cook With comali to come up with 3rd season 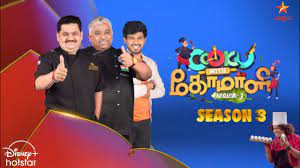 Vijay television is all set to launch the third season of Cook with Comali. The exclusive promo of the show is out. and it has created a huge of anticipation among fans. here are some exciting details from the upcoming TV show.

Cook With Comali To Come Up With 3rd Season

The previous two seasons of Cook with Comali were a huge hit. The TV show featured popular celebrities. And well-known comedians participate in the show. and they make the cooking process entertaining.

Pugazh, the entertainer, was noticeably absent from the teaser. As a response, people began flooding the comment sections of the show’s other participants and judges, Chef Dhamu and Chef Venkatesh Bhatt. Chef Dhammu replied “absolutely 100 percent” to a question about Pugazh’s participation in Season 3 on Instagram.

A total of six confirmed participants have been revealed so far. Urvashi, Archana, and Vijayalakshmi of ‘Survivor’ fame are rumored to be among the cooks in the future season.

It has also been reported that a few television personalities, including Roshini Haripriyan of “Bharati Kannamma,” Sree Nithi of “Senthoora Poove,” and actor Nandhan Loganathan, will compete in the season.

Fans are already delighted on social media to see the new talents on the small screen shortly, and Comalis will be appearing with the contestants, who are auditioning all around the state.