Cooku With Comali: Dhivyadharshini Neelakandan would love to participate in the new season of the show 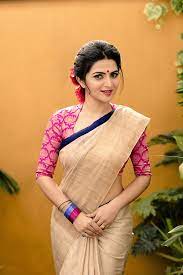 Popular host and actress Divyadarshini Neelakandan showed her willingness to participate in the popular cooking television reality show Cooku With Comali. So check out complete details about it below.

Dhivyadharshini Neelakandan Would love to participate in the new season of Cooku With Comalis:

Divyadarshini is really popular among Tamil viewers. While she has been entertaining audiences for 20 years. the actress has been part of shows like Koffee with DD, Enkitta Mothathe, Anbudan DD. She even has judged shows like Dancing Super Stars. The actress is now focused on the films.

Cooku With Comali is one of the popular TV shows. The TV show has completed its two-season successfully. And now makers of the show are gearing for the new season of the show. The third season of the show will be back in a few weeks. it is expected that Cooku with Kamali will be on screen in the month of September 2021. The confirmed details related to the starting date of the show will update on the page very soon.

You can check out the online broadcast of the previous season’s of the show on Hotstar’s official website and app.