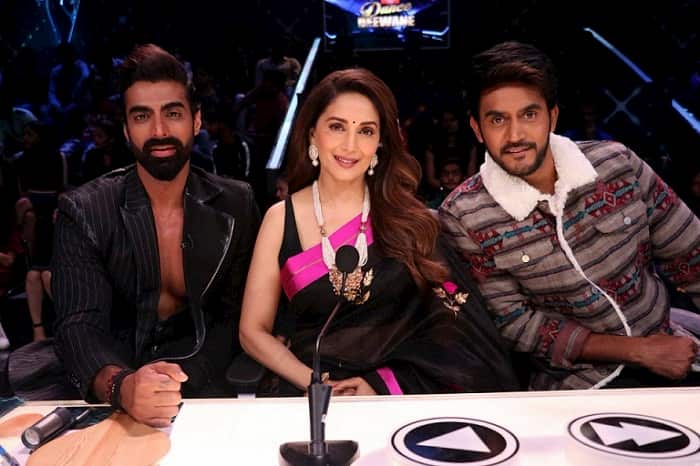 Dance Deewane is a dance reality show. After the success of the previous two seasons makers are coming up with season 3 of the show. Registration is open on Voot website and app, the show will soon start on Colors TV Screen. So check out Dance Deewane Season 3 Judges, Host Name, Start Date Details.

Dancing Diva Madhuri Dixit who is associated with the show as one of the judges is seen promoting the show from her house. Dance Deewane is one of the popular platforms which provides an opportunity for all the dancers out there.

So if you have the dancing skills here is a stage for you. The show gives a chance to showcase your talent for all age groups.

Season 3 of Dance Deewane will be judged by the popular stars. Judges of season 3 of the show are dance dive Madhuri Dixit, Dharmesh Yelande, and Tushar Kalia.

Superstar Star Madhuri Dixit who is an Indian actress. She has given many hit films of the Bollywood and known as Dhak Dhak girl.

Shashank Khaitan is an Indian film writer, director, and producer. He is a famous personality from Hindi cinema. Khaitan has recently directed the popular film Badri Ki Dulhania. And become a producer at Dharma Productions.

Tushar Kalia is a dancer and a choreographer who got his break in Bollywood with Karan Johar’s Ae Dil Hai Mushkil. He has also been a part of the popular show Jhalak Dikhla Jaa.

They have been hosting the previous seasons of the show too.

The Host of the season will be Arjun Bijlani. Earlier it was said that Sid-Naaz would be hosting the show however it is the Arjun who will return as a host of the show.

Arjun has always kept the entertainment level up in the show with his hosting skills.

Where can do Registration for Dance Deewane Season 3?

Makers of the show have decided to come up with the virtual audition for the season. As we all are aware of the current situation of the country due to corona. And the nation is following the lockdown there are no shoots taking place.

In this situation will be difficult for the makers to conduct the auditions in person. So the makers have come up with the virtual auditions for the season 3 of Dance Deewane

Dance Deewane Season 3 is going to start on 27th February 2021. Check the Complete Broadcasting Details of the show.

Dance Deewane has a unique format where the participants of various age groups compete with each other. Season 2 of Dance Deewane was won by Vishal Sonkar. Vishal bagged the winner trophy along with the cash prize of Rs. 15 lakhs.

For more recent updates of the Indian television industry stay tuned with us..!