Dasa Purandara To Hit TV Screens On This Date! 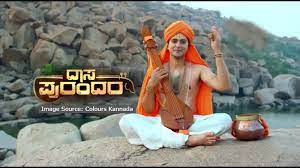 Colors Kannada is getting ready to premiere a new television show. The next TV show on the channel is called Dasa Purandara. Purandara Dasa, a medieval saint-poet and Carnatic music pioneer, will be the show’s main character. The television show will begin airing in the coming days. The final starting date of the show is officially out. Check out complete details about the premiere date and Broadcasting schedule. Find out how can you catch the online telecast of the show.

Dasa Purandara To Hit TV Screens On This Date!

Purandar Dasa, a Haridasa philosopher and a devotee of Madhwachrya’s Dwaitha philosophy saint from modern-day karateka, will be featured in Dasa Purandara. He was a composer, singer, and one of Carnatic music’s early proponents. He’s known as the Pitamaha because of his enormous contributions to Carnatic music.

The promo of the show is out already and it has created a huge amount of buzz. The tv show will premiere on Colors Kannada on 28th February. It will telecast at the evening time slot. While one of the ongoing shows of the channel will go off the air. And Dasa Purandara will replace it.

In Colors Kannada’s forthcoming project, many talented actors will be playing an important roles. Chandrakala Mohan will play a crucial role. The page will be updated with a complete list of the show’s cast members.

Viewers can also access the show’s online telecast at any time and from any place. The online broadcasting of the show will be broadcast on Voot’s official website and app. Voot is available on the Google Play Store and the App Store.

Keep checking back with us for the most up-to-date information about new television shows. Don’t forget to keep up with the latest audition news for the forthcoming television reality series.