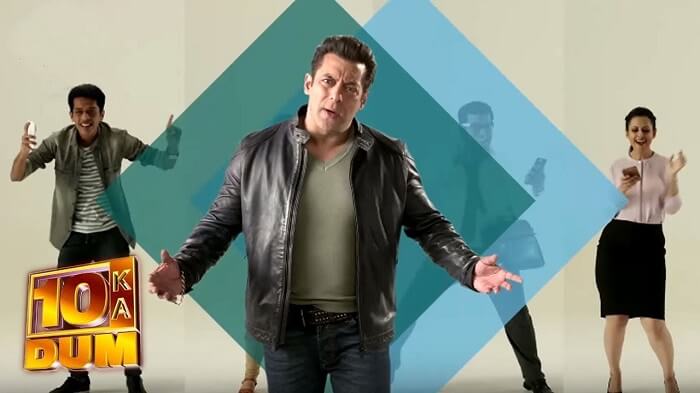 Do you Remember how funny superstar and popular Actor Salman Khan, He is also popular for hosting reality TV show Bigg Boss? As per as Sony Entertainment Television news, 10 Ka Dum is returning with its third season, after a gap of eight years. Dus Ka Dum 3 Auditions 2018 is an Indian version of the popular and biggest reality international game show.

The Dus Ka Dum is a quiz based reality show. In this show, two contestants compete against each other in a best three-out-of-five format. After the long time gap, the show is coming with Salman Khan “10 ka Dum season 3”. So the show is for common peoples, the Dus Ka Dum 3 Auditions 2018 has started, here are complete details of the auditions.

Based on the recent report the Sony TV intends to restart the show and get it back on the air for a third season. And once again Salman Khan will host the Dus Ka Dum 2018. (10 Ka Dum) Dus Ka Dum 3 Auditions 2018 and Online Registration started on SonyLIV apps.

The registration has started on the official website of the Dus Ka Dum. There you will find out the Details of the show. Send the registration in details.  Don’t forget right appropriate contact detail to participate in the show.

All Auditionees will need to carry the original documents and 2 self-attested photocopies of Photo Identity Proof and Valid address proof. This audition is free of cost.

The Group auditions will be held in 2 phases, the first phase to be held across Kolkata, Delhi, Indore, and Mumbai. And the second phase will organize in Mumbai. After the Ground audition, Shortlisted Participants selected to appear on the Dus Ka Dum Season 3 Game Show.

So get ready to participate in the show and to win big cash amount. The upcoming season will be more exciting and bigger. so start preparing yourself to compete in the new season of the Dus Ka Dum.

If Users are unclear as to the Rules or any element of the Show or have any queries/concerns pertaining to the Show, they can write in with their questions, concerns or queries to [email protected].

Disclaimer: AuditionForm is not directly or indirectly associated with the show or the Channel. All the rights of the show reserved to Sony Entertainment Television. We just provide auditions information based on respective sources.