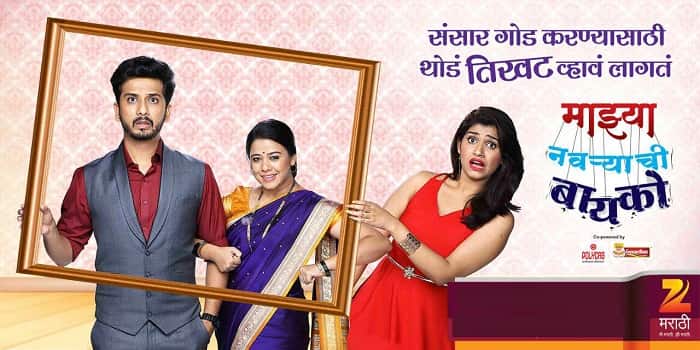 During this lockdown, the shoots for TV shows and movies were on hold. So fans were not getting the fresh content on the television. But finally, the star cast of the Mazya Navryachi Bayko has found a way to entertain their fans. So check out complete details below.

The tv show features Abhijeet khandkekar as Gurunath, Anita date as Radhika. While Isha Keskar is playing the role of Shanaya.

The latest episode of the show is shot by the cast members of the Majha Navryachi Baiko cast. The cast members took effort and short exclusive episode for their fans from their home.

The latest episode is the continuation of the last episode. The episodes feature the lead actor Gurunath in trouble. While in the last episode we also saw how Shanaya and Radhika United to teach Gurunath lesson by revealing his cheap tactics.

This different and unique format of the show has won hearts of viewers and fans are looking forward to watching more episodes from the Mazya Navryachi Bayko. You guys can also catch some previous episodes of the show on ZEE5’s official website and app.

Soon television lovers will be able to watch their favourite shows regularly on TV, as the shooting for the shows has resumed. So more details related to the popular shows will be available on the page regularly.

Stay tuned here to get the latest updates from the entertainment world.