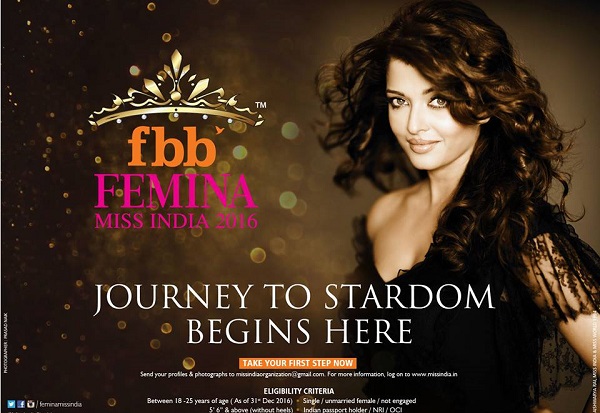 Miss India 2016 is India’s oldest and most credible beauty pageant with lineage of 53 years, owned by Times of India Group. The Pageant explores and brings together young talent for the fashion, lifestyle and entertainment industry. The 53rd year of MISS INDIA will be touring across 18 cities divided into following: 14 city auditions 3 City Pageants and Mumbai Final round of Auditions.The auditions will be in India, such as the four corners North, East, West and South.

The applicant must agree to abide by all rules, as changed from time to time by the Organisers.

The applicant should be between 18 – 25 years of age as on 31st December 2016 – Height 5.6″ & above – Unmarried/ single/ not engaged – Born Indian National holding valid Indian passport, OCI, NRI. The applicant will be required to produce their age proof (Passport, birth certificate, school leaving certificate, driver’s license, etc).

For any queries about Fbb Femina Miss India 2016