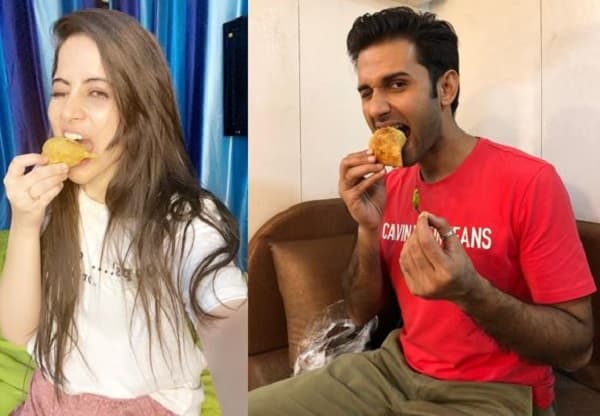 Mumbai: Like we all love our fast food, even actors indulge in their share and sometimes even cheat on their diets. The cast of Dangal Tv’s Aye Mere Humsafar has found a new favorite while at work. And guess what the winning food is? It is none other than the ‘Punjabi Samosa’.

The cast of Aye Mere Humsafar have been indulging in the samosas prepared on set almost daily. It is now being prepared on demand and they can’t stop at having one.

Urfi Javed who has been off from her Aye Mere Humsafar shoot for a few days states that she has already started missing her evening samosa break. “I generally love samosas but avoid having them but I can’t resist the samosas that are cooked on the set of Aye Mere Humsafar. At times I even end up having Tina’s share of samosas. Since my character Vidhi has been kidnapped, I haven’t been on set for the past couple of days. I miss shooting, my co-stars, Tina and mostly the samosas!” added Urfi who plays the role of Vidhi’s sister Payal in the soap.

Sharing his love for the set ka samosa, Achherr Bhaardwaj who plays the role of Lakhan Kothari, Ved’s brother added, “I try to avoid eating all the forbidden deep-fried stuff. But I cannot resist the samosas that are cooked on the set of Aye Mere Humsafar every evening. It is extremely tempting to see them deep fry it and its aroma makes it all the more tempting. At times I pretend to avoid eating but end up eating them in my room. These are extremely delicious!”

We wonder who the chef is? And well, who knew a samosa could be such a winner someday!

Aye Mere Humsafar is the story of an ambitious Vidhi Sharma who is determined on becoming an IAS officer but is instead forced to marry Ved to save her mother from embarrassment in society when her sister Payal runs away from her wedding with Ved.