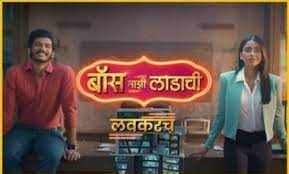 Sony Marathi TV Channel is all set to kick off the new tv Show Boss Majhi Ladachi Very Soon. Boss Majhi Ladachi TV Show is coming up with a new concept representing Husband and Wife Relationship who are also Boss and Employee in Office. The Starting Date of the Show, Time, and complete cast will reveal very soon.

So in the upcoming show viewers will see the story of Husband and Wife who are the Boss and employees in the Office. Bhagyashree Limaye will make her come back on Television after two years. She will play the Lead Role of wife and Boss. Where she is the Ceo of the Company and her husband is also an employee. On the other hand, Aayush Sanjeev will play the role of Husband and Employee. Also, it will be marked as the Television Debut of Aayush Sanjeev. Whereas viewers will also see popular actors Girish Oak and Rohini Hattangadi playing the important role in the TV Show.

The Promo of the show Boss Majhi Ladachi is out, you can catch it on the social media platforms of Sony Marathi. It gives little hints to the fans that how the show will be. And already the TV show got a good amount of responses and was loved by the viewers. So the fans are eager to look forward to the Show kick-off soon. TV show’s lead actress Bhagyashree Limaye also posted the promo of the show on her Instagram Official Account. You can check it out.

Officially the details of the start date of the show and kick-off time are not yet announced. So stay tuned with us to catch all the updated information about the show. All the latest information about Boss Majhi Ladachi will be updated here as soon as it is announced officially.