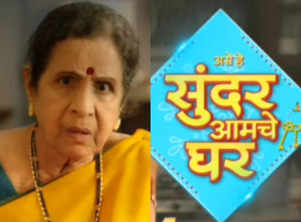 Sony Marathi is all set to come up with a brand new TV show very soon. The TV show started as Sundar Amche Ghar.  The exclusive promo of the show is out. and it has created a huge amount of anticipation among fans. The TV shows going to feature one of the iconic actors in the key roles. Usha Nadkarni will make her come back on the TV screen with this TV show. check out complete details about it below.

The plot of the show will revolve around a strong bond between mother in law and her daughter-in-law. Usha Nadkarni will be playing the role of disciplining grandmother. she is very strict with her daughters-in-law. The promos of the show are well received by viewers.

One of the talented actors will be part of this TV show. The project will feature Sukanya Mona, Sanchita Kulkarni in the lead role. and Usha Nadkarni will also play a key role in the show. fans are extremely excited to see their favorite actors back on screens with new characters.

The TV show will premiere in the month of March. The official starting date of the show will be available on the page in a few days. it is going to replace one of the ongoing shows of the Sony Marathi.