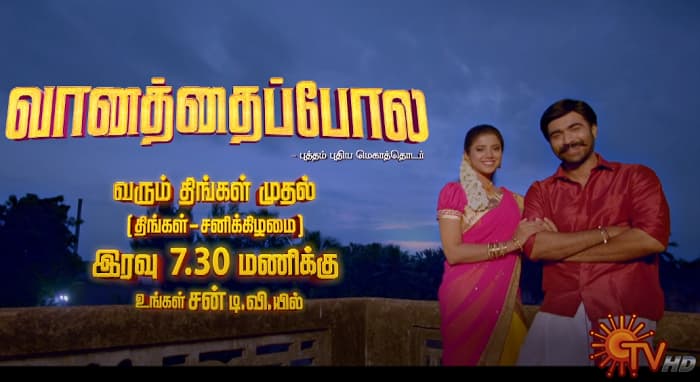 Sun TV is coming up with a new project very soon. The upcoming TV show on the channel is titled Vanathai Pola. The TV show will be on air in a few weeks. So here are complete details about the starting date of this brand new TV show. Check out the storyline, cast, and promo of this show.

Vanathai Pola will have a very interesting story line. The TV show will feature an entertaining Love Story. The promo of the show is out. And fans are extremely excited to watch the unconditional love between Anna and Thangai.

The promo of the Vanathai Pola has won the hearts of many fans. Vanathai Pola will hit TV screens on 7th December. The TV show will broadcast on every Monday to Saturday at 7 p.m.

Sun TV Vanathai Pola will have a very talented and prominent actor in pivotal roles.

Popular actor Thaman Kumar will play the lead role in the show. He has been part of many popular films. He was seen in Summa Nachunu Irukku, Thottal Thodarum, Athiyayam.

Shweta Khelge will also play a role in the show. She was part of many popular shows. Thilak gas also joined the Cast of this show. The names of the rest of the cast members of the show will be available on the page very soon.

You can easily watch the entertaining episodes of this show and other shows of Sun TV online at any time and anywhere. Sun TV’s official website will provide an online broadcast of the show. You can also check out Yupp TV’s website.

Stick around with us to get latest updates from the television world. Also, don’t forget to check out audition updates of an upcoming television reality show.