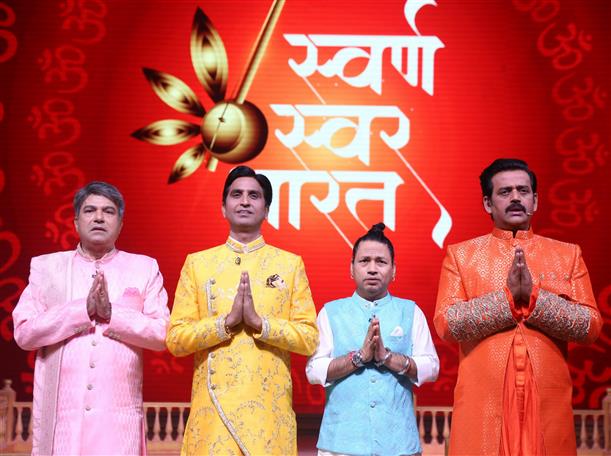 Zee TV is bringing another new interesting singing show. Swarna Swar Bharat singing reality show has released day ago. The TV Show will be a Devotional singing show. So it will be a completely different reality singing than other shows. Fans can see some of the glimpses of the show through the Promo of the show. Check out complete details about the host and judges of the show.

Indian actor and politician Ravi Kishan will host the Swarn Swar Bharat show. He is also the Lok Sabha MP from the Gorakhpur Constituency. Other than that AvdheshanandG, Punit Goenka, Kailash Kher, Yogrishi Ramdev, and Anurag Thakur can be seen in the show. Devotional singers from across the are excited to take part in the show. Swarna Swar Bharat Participants will perform the Bhakti Geet, Aarti, and Bhajans in the show. So it makes reality shows more interesting and exciting.

Zee TV will broadcast the telecast of the Swarna Swar Bharat Show. Viewers can catch the telecast of the show at 8 PM. The Show started its telecast on 22nd January 2022 and will air on Saturday and Sunday. It will also be available on the DIgital platform Zee5. You can sign up for the Zee5 Subscriptions. The details will be available on the official website of Zee5. On the other hand, you can download the Zee5 official app from Play Store.

Hosts, Judges, and Guests of the Swarn Swar Bharat show assured the audience that this show won’t be like any other reality show. The Singing show won’t be showcasing the background of the contestants and sensationalizing them. So make sure you catch the telecast of the Swarna Bharat Reality show. While the digital audience can catch the telecast of the show on Zee5.