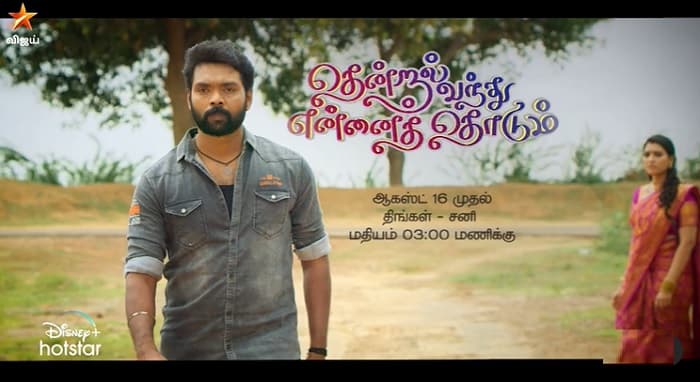 The story of the show is a unique one where the Abhinayaa returns from the US for the first time and meets Vetri in the temple. However, Vetri gets married to Abhinaya in the temple when the situation was odd as she was defending another couple.

Abhinaya wasn’t happy as she has no such plan however, she will be holding on to the marriage as she values their culture and tradition. Abhinaya will be in Vetri’s life as his wife even if he doesn’t accept the marriage. It is now interesting to watch how they both will cope up with each other.

The female lead role of the show is portrayed by Pavithra Janani. She will be in the role of Abhinaya who is a US return however, also values the tradition. Pavithra is popular for her role in the show Eramaana Rojaave, Lakshmi Vandhachu, Office, Raja Rani, and many more.

The male lead actor of the show is Vinoth Babu. He is a popular Tamil actor where he will be in the role of Vetri. Vetri is a different character where he is non-polite and has rustic behavior. Vinoth has been a part of many shows as host a few to-name shows are Comedyku Naanga Guarantee, Kollywood Sambrathayam, Kalakka Povathu Yaaru 8 and many more.

Auditor Sridhar will be playing the role of Shankar Narayanan. There are other cast members too part of the show.

For more latest updates about the Indian entertainment industry stay tuned with us..!!