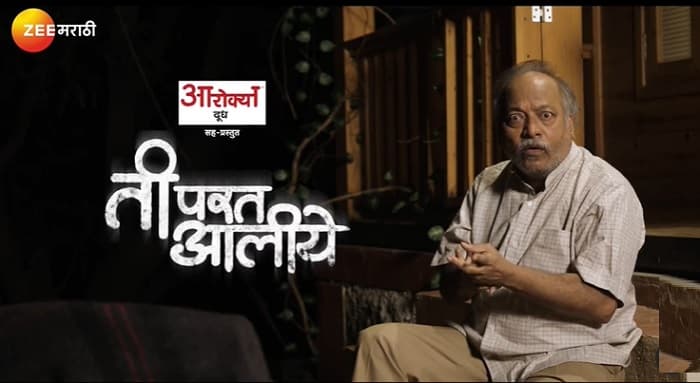 Zee Marathi is all set to come up with a brand new tv show very soon. The upcoming TVs how on the channel will be Horror, Mystery Drama. And it is titled as Ti Parat Aaliye. One of the talented actor Vijay Kadam will make the come back on screens with this tv show. The tv show will hit tv screen in a few days. The official starting date of the show is out. So here are complete details about the Ti Parat Aaliye Start Date 2021, Time, Schedule, Cast on Zee Marathi.

The plot of the Ti Parat Aaaliye is very intense and mysterious. The TV show will be terrifying for sure. The story of the show revolves around some Ghost or witch who is hunting the people in the neighborhood. We will see how these people will save themselves from Her.

Ti Parat Aaliye will hit tv screen on the 16th of August. The tv show will be broadcast every Monday to Saturday at 10:30 PM.

The new promo of the show is out and we can see figures that look like urban Legend Momo. The promo looks terrifying. The names of the rest of the cast members of the show are not out yet.

The tv show will have one of the prominent actors in the key roles. The tv show will, feature Vijay Kadam in the lead role. He will be making his comeback on screen after a big break. Vijay Kadam is one of the popular and talented actors in the film and TV industry. He has appeared in movies like Monkey Vaat, Atrocity, Chalu Dya Tumcha, and many more.