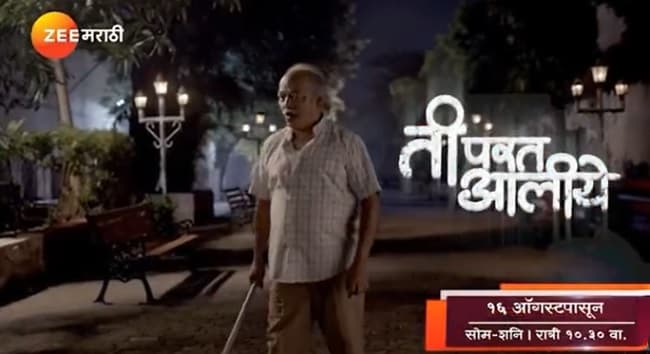 Zee Marathi is one of the popular Marathi TV channels in Maharashtra. The TV channel has launched a number of TV shows. And now it is gearing up to launch a new show titled ‘Ti Parat Aaliye’. The TV show will be a horror TV show. and it will feature a very interesting storyline. The Exclusive promo of the show is out. So check out complete details about Ti Parat Aaliye Start Date, Cast, Promo, Zee Marathi Upcoming Show.

The TV show will be written by Swapnil Gangurde. He has written Zee Marathi’s one of the hit TV shows Ti Parat Aaliye. which is currently extremely popular among viewers. So fans have extremely high expectations from this brand new show ‘Ti Parat Aaliye’.

Ti Parat Aliya will hit the TV screen on 16th August. The TV show will be broadcast every Monday to Saturday at 10:30 p.m. It will replace Zee Marathi’s new show, Dev Manus.

The promo of the Zee Marathi is a new show ‘Ti Parat Aaliye’ has created a huge amount of buzz among the audience. The concept of the show is very mysterious. The promise features Vijay Kadam playing a key role. He is walking a specific area where a lot of murders are happening. and he is telling people to stay aware as she is back. Now, who is ‘she’ is a big mystery.

The TV show will feature one of the popular and talented actors in a pivotal role. veteran actor Vijay Kadam will make his comeback on the TV screen with this TV show. He has been part of many iconic shows and Marathi movies. Fans are definitely excited to see him back on screens. Vijay Kadam will play an extremely important role in the show. The names of the rest of the actors in the show are not revealed yet. So, the full list of cast members of the show will update on the page.

stay tuned with us to get the latest updates from new tv shows. Also, check out the audition updates of upcoming television reality shows.