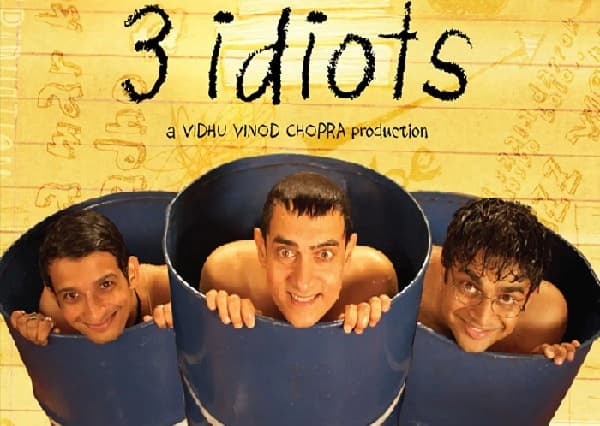 Bollywood has givens us a number of hits and popular films over time. Movies that you can watch multiple times and never get bore of.

Check out the list of Popular and Best Bollywood movies of all the time here on this website. To know more about the best films in Bollywood stick around this page

The story of the film is about engineering college life and it teaches us the values of life. How one should be fearless in life and keep working on your goals with equally enjoying life. One should follow their dreams and do what they feel to be in life.

The story is based on the novel Five Point Someone: What Not To Do At Iit by Chetan Bhagat.

Mary Kom is a film based on the India Boxer Mary Kom. The film came in the year 2014. It is starring the popular actress of Bollywood Priyanka Chopra Jonas who is playing the role of the boxer Mary Kom. While the role of her husband played by the Darshan Kumar and mentor by Sunil Thapa.

The story of the film is about the journey of the Mary Kom becoming a boxer. The film also show how she struggles in her life and become a boxer. May Kom participates in the 2008 AIBA Women’s World Boxing Championships where she reaches the finals. And wins a championship for India. Later she is given the name ‘Magnificent Mary’ with the waving flag of India and National Anthem playing in the background.

Jab We Met is another one of the best films in Indian cinema. It is a romantic-comedy film starring Shahid Kapoor and Kareena Kapoor Khan.

The character or Geet played by Kareena Kapoor Khan in the film is very touching. It tells that one should live life to the fullest and enjoy it. Do what your heart feels like. And let go things which are not under our control.

And the romantic part of the film is how Geet and Aditya fell in love with each other.

Taare Zameen Par is a 2007 film which stars Aamir Khan and Darsheel Safary in the lead role.

The story of the film is about the boy Ishaan who suffers from dyslexic. And he is sent to boarding school as he was not excelling in his educational grades although he was good in the art work.

In the boarding school one of his teacher the role played by aamir Khan learns that the child is suffering dyslexic and he helps Ishaan come out of it.

And later he not only improves his art but also excels in his educational grades.

The story of the film is based on the true story of NRI (Non-resident Indian) man who comes back to his homeland India. The role of Mohan Bhargava is played by Shah Rukh Khan. Mohan is a Project Manager at GPM program at NASA, United States. He takes few weeks off and returns to his motherland India to find his Kaveri Amma after the death of his parents.

He comes to India to find his Kaveri Amma and falls in love with Gita who takes care of Kaveri Amma in a village. During all the time he constantly gets calls from NASA as he was working on one of the projects. Gita and Kaveri Amma didn’t wish to settle in the US with him so they both opted to stay back in India.

Mohan then returns to US completes the project and decides to comeback in India forever and stay there. He has an intentions to work with Vikram Sarabhai Space Center. However, the movies ends by showing Mohan living in a village and wrestling near the temple.

The story of the film is a fictional story of the Indian women’s national field hockey team. The film shows the struggles of each and every players of the team in their life to be there in the team for the country.

It also shows how the team spirit made the team win the championship for India.

Barfi! is a 2013 film starring Ranbir Kapoor, Priyanka Chopra, and Illeana D’Cruz in the lead roles of the film. The story is written, directed, and co-produced by Anurag Basu.

The story of the film is based on the boy Murphy Johnson who is a deaf-mute boy and he has relationships with two women, Shruti and Jhilmil.

Where Jhilmil is a autistic women. The story of the film is beautiful rolled and the characters are beautiful played in the film.

Panga is a 2020 film based on the sports drama starring Kangana Ranaut, Jassi Gill, Richa Chadda, and Neena Gupta.

The story of the film is about the Kabaddi player. It is a film about an Indian middle-class woman.

Raazi is a 2018 film starring Alia Bhatt and Vicky Kaushal in the lead roles. It is a spy thriller film directorial of Meghna Gulzar.

The story of the film is based on Harinder Sikka’s novel Calling Sehmat. It is about the true account of an Indian Research and Analysis Wing (RAW) agent who, on her father’s request marries to one of the military officials family in Pakistan.

Where is a asked to find out the information about the Pakistan’s activity against India prior to the Indo Pakistani War of 1971.

For more recent updates stay tuned with us..!!