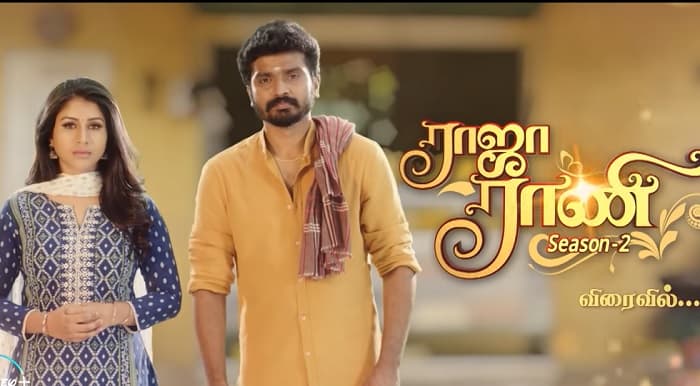 Raja Rani the popular Tamil television show is coming up with season 2 of the show. Season 1 of the show was a great hit and makers are bringing back the story with season 2. Raja Rani Season 2 Start Date, Cast, Story, Promo, Time Table.

The story has a base from the popular Hindi television show Diya Aur Baati Hum.

The story of season 2 is going to be about a couple. The man will be a vendor at one of the shops. He gets married to a girl who is an IPS aspirant.

The women aim to be an IPS officer and break all the stereotypes. She aims to prove that girls are no less than boys and even they can dream big and achieve.

The cast of the show is a very amazing and popular one. Makers will be bringing the older faces back to season 2.

Sidhu Sid is a popular Tamil actor and he will be playing the male lead of the show.

The other cast members of the show are going to be Praveena, Sreenidhi Sudharshan, and many more.

Also, there will be few more new faces appearing in season 2 of the show.

The show will be coming soon on the television. The makers are yet to announce the official start date of the show.

We will soon be updating you regarding the start date of the show soon after an official confirmation from the sources.

You can now enjoy the promo of the show on YouTube and Disney+ Hotstar app.

Also, you can enjoy the show before television on the digital platform Disney+ Hotstar.