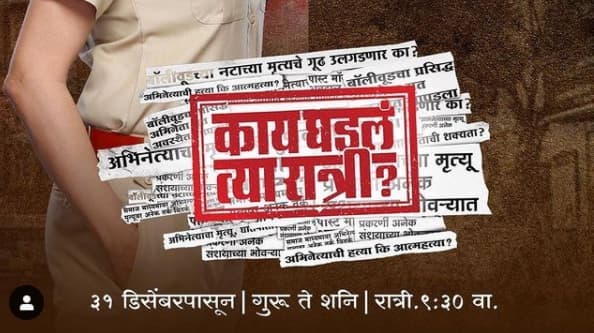 It is a Marathi thriller show full of a murder mystery. Officer Revati Borkar will be solving the cases intelligently and smartly.

The role of IPS officer Revati Borkar will be played by the popular actress Manasi Salvi. She will be marking her come back on Marathi Television after 13 years.

The other star cast of the show is the popular faces Smita Gondkar, Sushant Shelar, Smita Limaye, Chetan Vadnere.

Jayawant Wadkar, Vijay Nikam, Kishor Kadam, are also a part of the show in important roles.

The storyline of the show is going to be an amazing one. The death of an actor which is a suicide case seems like murder to Officer Revati. And she is all set to find out the truth behind the death.

The show will air on Zee Marathi from Thursday to Saturday only at 9:30 PM.

The show will take its launch on the television from December 31, 2020.