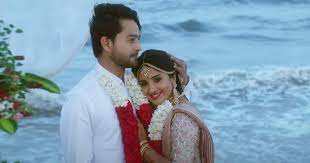 Zee Telugu is coming up with another new entertaining TV Show. ‘Kalyanam Kamanneyam’ is all set to air on tv screens from 31st January 2022. The new TV Show is scheduled to run in Evening Slot. So check out below the complete details related to ‘Kalyanam Kamaneeyam’.

The Start Date of the TV Show is 31st Jan 2022 and Episodes will be live at the 7:30 PM Show. ‘Kalyanam Kamaneeyam’ is a Family Drama show, the TV show will be based on the journey of the Mother and Daughter who are separated by fate. And how time and life brought them together. So the TV Show will be full of suspense and Entertainment.

Mano, Madhusudan, Haritha, and Meghna Lokesh will play the key roles in ‘Kalyanam Kamaneeyam’. Madhusudan as Rockstar Viraj, mano as the role of Govardhan, Haritha as Seetha Ratnam, and Meghna Lokesh as Chaitra. It will be the Third Time Meghna Lokesh is associated with Zee Telugu and the actor is excited about it. She played various roles till now, the new role is quite different than others. So her fans are looking forward to seeing her in another new Role.

The Telecast of ‘Kalyanam Kamaneeyam’ will be available at 7:30 PM on Zee Telugu. Digital Audiences can watch the episodes of TV Show on Zee5. It is available on the official website of Zee5, or else you can download the official app of Zee5 from Playstore. Stick with us to catch the latest news of forthcoming tv shows on AuditionForm Website.