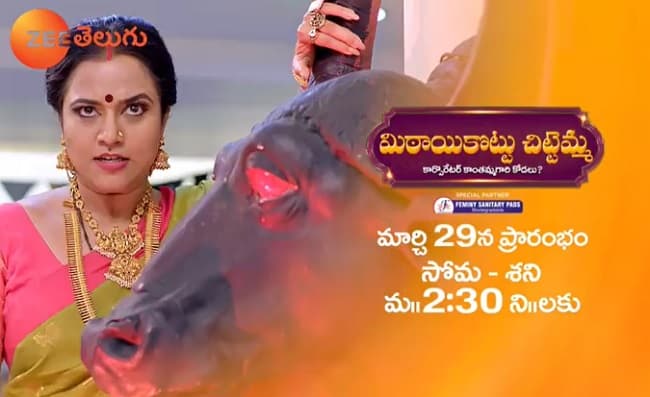 Mitaikottu Chittemma is an upcoming project of the Zee Telugu. The tv show will hit TV screens very soon. The TV show has a really interesting storyline. and the promo of the show is out. So here are some exciting details from these brand new TV shows. Also check Mitaikottu Chittemma Start Date, Time, Cast.

Mithaaikoti Chittamma will revolve around a Chittemma, she is a self-made village girl. The TV show will showcase how Kanthamma, a ruthless politician, who wants to fulfil her political dreams wants her son to get married to a girl from a well of family. But her son falls in love with Chittamma .

It is expected that these TV shows based on the Marathi TV show Mrs Mukhymantri. The promo of the show is receiving a huge amount of response from fans.

Zee Telugu this brand new TV show Mitaikottu Chittemma will feature one of the talented actors in pivotal roles. The TV show will have Anusha in negative rope. While Rajeev Ravi Chandra will play the role of a male lead. Nakshatra Srinivas will play the role of Chittimma. The full list of the cast members of the show will update on the page very soon.

Stay tuned with us to get the latest updates from new TV shows. Also, don’t forget to check out audition updates of an upcoming television reality show