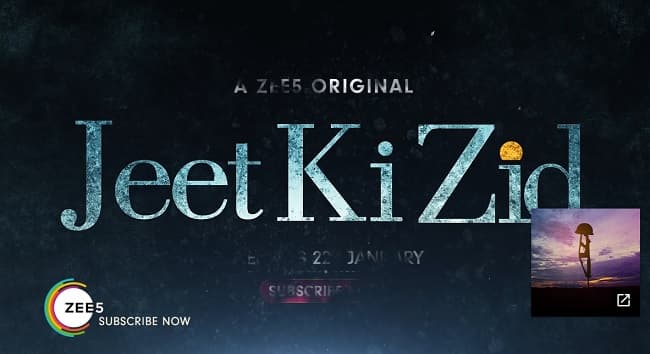 Zee5 is one of the popular OTT platforms. They have released many iconic shows like Naxalbadi, Black Widows, Bichhoo Ka Khel, Dark Seven White and many more. And now zee5 is gearing up to launch brand new web series titled as it Jeet Ki Zid. This upcoming project is based on true stories. While one of the talented and prominent actors are part of this project. Zee5 Jeet Ki Zid Release Date, Cast, Plot, Promo, Upcoming Web Series.

Jeet Ki Zid Release very soon. So here are complete details about the release date of the show. Also, find out more information related to the plot and cast of the show.

Jeet Ki Zid is an action thriller series. The plot of the series is based on a true story. It will feature an inspiring tale of a Soldier who’s never given up attitude helps him overcome tough challenges.

It is based on the story of Kargil Warfighter major Deependra Singh Sengar. He was paralyzed waist below after fighting the Kargil war. But his army training and his never give up attitude help him to fight all odds.

The teaser of the show is getting a huge amount of positive response from the fans.

Jeet Ki Zid will be released on 22nd January. To watch this inspiring action thriller, you will need to sign up for the premium subscription of zee5. To get complete details about their plants you can visit the official website or download the Zee5 app from the Google Play Store and app store