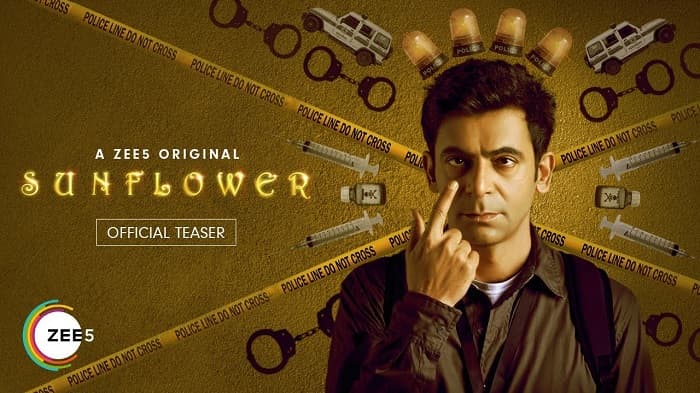 Sunflower is a Zee5 brand new Web series. The web series is a crime thriller comedy. While it is directed by Vikas Bahl. And it is produced by Reliance entertainment and Good Co. The web series has released a few weeks ago. so check out the complete details about the Zee5 Sunflower Cast Members, Watch online free Episodes, and Plot.

The story of the sunflower revolved around a murder mystery based in the middle-class Housing Society in Mumbai called sunflower.  The chief becomes suspect of this Murder. The web series is filled with suspense. and it has a lot of interesting twists and turns.  It keeps you hooked to the screen and it is entertaining for sure.

The Web series have total of 8 episodes. And it have received mixed response from the critics.

Many people are impressed with the characters in the show. The actors which were part of the show have gave complete justice to the characters.

Many popular actors are part of Zee5’s upcoming web series sunflower. Sunil Grover is playing a pivotal role in the show. he is playing the character of Sonu Singh.  While Ranveer Shorey,  Mukul Chadda,  Girish Kulkarni are also playing pivotal roles in the show. While Sonali Nagarani, Sonal Jha, Radha Bhatt,  Saloni Khanna, Ashwin Kaushal are also part of this TV show.

Zee5’s sunflower released on 11th June 2021.  To watch this show and other interesting projects of the Zee5,  you will need to sign up for the premium subscription. check out Zee5’s official website to get more details about the subscription plan.