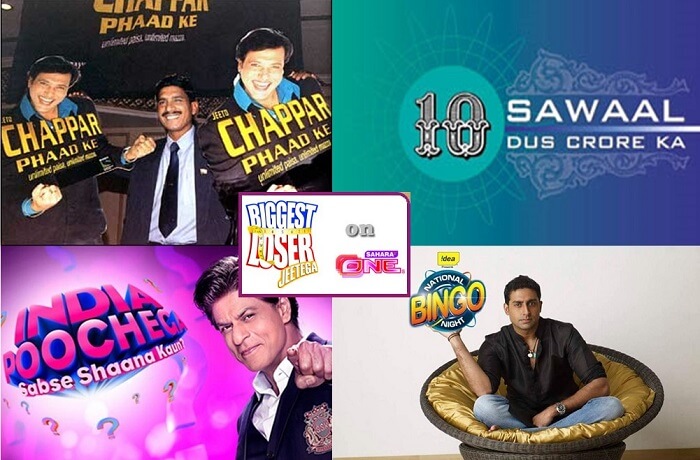 A game show in which globe-trotting contestants solve puzzles and complete tasks in order to win a cash prize. In India, some Reality game show is the very popular and famous, that Kaun Banega Crorepati and Khullja Sim Sim was popular in India. But Here we are going to explain about some Flop Reality Game show (Television), who has not popular.

India Puchega Sabse Shanna Kaun was the Indian Television Reality Game show. This Show hosted by Shahrukh Khan and it has Copy Write of International Show (Who’ s asking). The show is a first of its kind where the common man will don the hat of the ‘asker’, as well as that of the contestant. Two pairs compete against each other for a winning amount of ₹10 million and it Starts on 2 March 2015 on Zee Network’s newly launched entertainment channel & TV. In this game show four lifelines to guide him/her along with Govinda, Sahi ya Galat (Right or Wrong), Janta Se Mang (Public question), and ghar se do (Two from four). And the prizes to be win were No Limite Rs 10 million, not Rs 100 million but as much as can be the win.

National Bingo Night was Indian Television Reality Game show. The Show was based on American Game Show as the Same Name, The Show Was Schedule On Colors Television on 23rd January 2010. The Show was Hosted By Most Popular Actor in Film Industry Abhishek Bachan. The first celebrity guest on the show was Amitabh Bachchan and they won ₹ 25,00,000 prize money. and the second winner was Vidya Balan and Arshad Warsi.

Sawaal Dus Crore Ka was an Indian television reality game show that aired on Zee TV. Afte the huge Success Of Kaun Banega Crorepati, Sawaal Dus crore Ka did not meet the same success as it. The Show was hosted by Film Actors Anupam Kher and Manisha Koirala. The contestant round gives the winner Rs 1. For each subsequent round, a zero is added to that figure. To win the magic figure of Rs 100 million, he will have to go past nine rounds of questioning.

Biggest Loser Jeetega was Indian Television Reality Game show. This is the based on America s’ (The Biggest Loser) reality game show. The Show was Popularity with Sahara one Channel and that Was Hosted By Film Actor Sunil Shetty. The Show Was  Featured Sixteen Obese Contestants From India, Who Competed With Each Other To Lose The Most Weight. The Contestants were Divided into Two Teams, Where Each Was Assigned a Trainer.