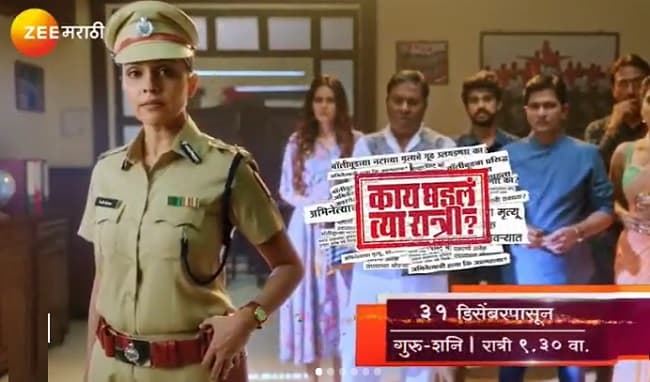 Zee Marathi is all set to come up with a brand new project very soon. The upcoming TV show on the channel is titled as Kay Ghadla Tya Ratri. The TV show will be murder Mystry. and it will have a very interesting story line. so here are some exciting details about the cast members of the show. Also check out more information related to the Kay Ghadla Tya Ratri Cast Name starting date and broadcasting schedule of this TV show.

Kay Ghadla Tya Ratri will feature story of superstar that has died by suicide. Everyone is kind of shocked and confused whether it’s suicide or murder. A cop is trying to solve the mystery behind his death. the main suspects of his murder are family members. the TV show will be filled with a lots of suspense.

The promo of the show is out. and it has received huge amount of positive response from fans. Television lovers are extremely curious and excited to watch this TV show.

Kay Ghadla Tya Ratri will feature one of the talented television and film actors. The TV show have Mansi Salve in a lead role. She will portray a role of IPS Police officer She will play the role of police officer name Revati Borkar. She is hardworking and strong police officer and a loving mother.

Sushant Shelar and Smita Gondkar will also play a pivotal role in the show. the names of the rest Cast members of show will be available on the page very soon.

Zee Marathi Kay Ghadla Tya Ratri will hit TV screens on 31st December. The TV show will broadcast on every Thursday to Saturday at 9:30 p.m.

Stay tuned with us to get the latest updates from new TV shows. Also, don’t forget to check out audition updates of the upcoming television reality show.