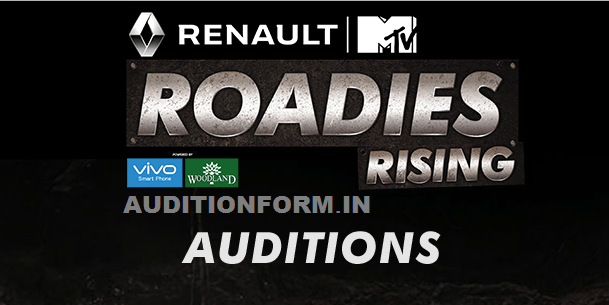 MTV Roadies is the popular Youth reality show back with a new season, “MTV Roadies Rising” (MTV Roadies x5). After successful previous Renault Roadies X4 Season coming with a new version. Its auditions will start from 27th November 2016 with Pune audition. So Get ready to participate all Roadies Lover in the Upcoming Roadies season. See Below MTV Roadies Rising Auditions Details

You are 18+ years of age and should Indian nationality so get ready to participate in this show. Who will judge the show will be different for this season. The MTV Roadies X4 Judges was Bollywood actress Neha Dhupia, Rannvijay Singha, Karan Kundra and Sushil Kumar which was later replaced by the Prince. But who will judge by MTV Roadies X5 season? it will have some twist this season.

The MTV Roadies X5 2017 auditions forms will be available at the audition venue and participants have to fill the application form on the spot and submit to the moderator of group discussion. The information regarding online registration is yet not disclosed by the channel. See Below Auditions details (City, Dates, and Venue).

GATES OPEN AT 9 AM