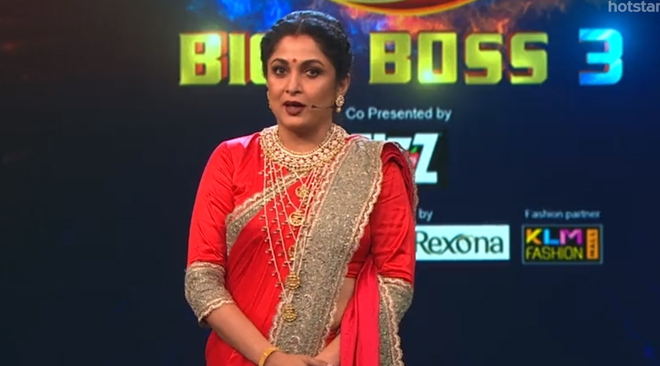 Kamal Haasan have been tested positive for covid-19. The actor is currently going under treatment for the covid-19. So he will be not available for 2 weeks to host Bigg Boss Tamil. So fans were wondering who will be seen as the presenter of the show for a few weeks. According to sources, the makers of the show have roped in Ramya Krishnan to host the Weekend ka war episodes. Check out complete details about it below.

Earlier fans were speculating that Kamal Haasan’s daughter Shruti Haasan may host the show until her father comes back from the hospital. While makers of the shows approach Vijay Sethupathi and Ramya Krishnan. but finally, it is confirmed that Ramya Krishnan will be seen as the host of the show.

Ramya Krishnan has already hosted the show in 2019. so she is well aware of how the format of the show works. fans are extremely excited to see the actress back on the show.

Talking about the health condition of Kamal Haasan. He is currently doing better. Shruti Hassan had shared an update on her Twitter. and she also thank fans for their wishes and prayers.

Bigg Boss Tamil is currently one of the popular television reality shows. The TV show is featuring many popular contestants and wild card entries. Sanjiv has entered the show as a contestant. While Abhishek Raja who was evicted from the show is also an entry in the show again.

you can check out the entertaining episodes of the Bigg Boss Tamil online at any time and anywhere. The online telecast of the show is available on Voot’s official website and app. You can download the Voot app from the Google Play Store and App Store.