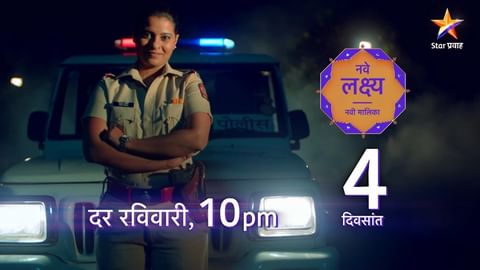 Star plus is all set to come up with the new tv show Nave Lakshya. The tv show will be on air in a few days. While it will feature one of the top actors in pivotal roles. The tv show will back with the new edition. The first season of the show was a massive hit. Shubhangi Sadvarte will play a key role in the show. The actress shared some views about this show. So, check out the complete details below.

Nave Lakshya will feature a competent Police Team, who will solve complicated murder mysteries and will serve justice to the common man. The promos of the show have got a massive amount of love from all over Maharashtra.

The tv show will hit tv screens on the 7th March and it will broadcast on every Sunday. The online broadcast of the show will be available at anytime and anywhere.

Shubhangi Sadavarte will play the role of Mokshada Manohar Mohite.

She shared her thoughts on being part of this tv show in an exclusive interview with TimesofIndia. She said “I am playing the character of Mokshada Mohite, a cop. Mokshada thinks about every incident and crime from all angles and gives her opinion. She doesn’t spare abuse against women, which is why criminals are scared of her. Even in real life, Mkshada inside me awakens whenever there is injustice happening in front of me.”

she added ” My respect for the Police Officer has increased even more while doing this show. We get to know the uniform’s actual value when we wear it. I am glad at the response of Nave Lakshay’s teasers are getting.”