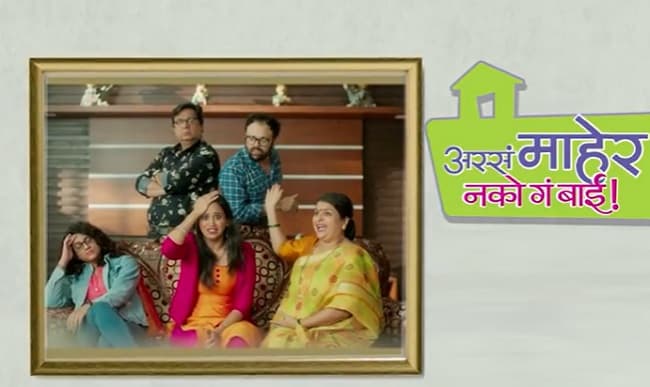 The Exclusive promo of the show is out. And it is filled with funny moments. it seems like this TV show will be a light-hearted comedy and family drama. Viewers will get to see the interesting chemistry between these family members.

Assa Maher Nako G Bai will hit the TV screen on 7th December. The TV show will broadcast on Sony Marathi. it will telecast every Monday to Saturday at 10:30 p.m. While viewers can also catch the broadcast of the show at any time and anywhere. SonyLiv’s official website and the app will provide download broadcast of the show. You can download the Sony live app from the Google Play Store.

Sony Marathi Assa Maher Nako G Bai will be filled with talented actors. Many talented actors are coming back on the TV screen with this TV show. The TV show will have Swanandi Tikekar in the lead role. While Pushkaraj Chirputkar will play a male lead role in the show. Rajan Bhise, Supriya Pathare will be playing role in the show. The names of the rest of the cast members of the show will be available on the page very soon.

Swanandi Tikekar and Pushkaraj Chirputkar won hearts of millions of television lovers with their show Dil Dosti Duniyadari. While Rajan Bhise has been part of popular Marathi show. And Supriya Pathare is also one of the popular Television actress. Fans are definitely excited to see all of them together in one show.

Stay tuned with us to get the exclusive updates from television world.