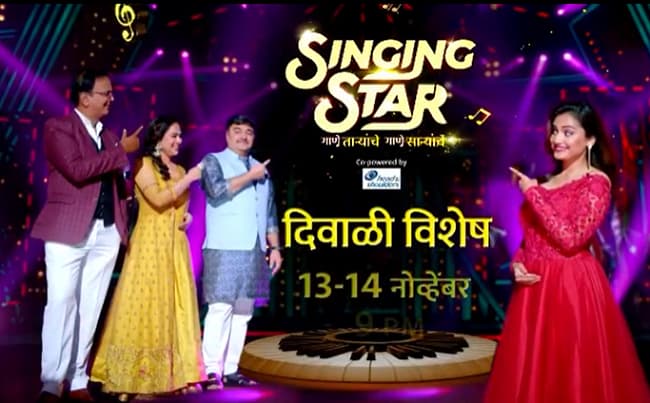 Singing star is one of the popular TV show in Maharashtra. The TV show premiere on Sony Marathi on 21st August 2020. In a short period of time, it won the hearts of millions of television lovers. The TV show featured Maharashtra’s favorite celebrities showing their singing talent. After a journey of a few weeks, the names of the finalist of the singing star are out. So here is the List of Sony Marathi Singing Star Contestants.

Singing Star is one of the Unique singing television reality show of Maharashtra. The TV show featured popular celebrities and actors like Anshuman Vichare, Abheejet Kelkar, Shankarshan Karade, Juhi Gadkar, and many more part of this TV show. While Astaas kale Swanandi Tikekar, Yashoman, and Girija oak are popular contestants of the show.

The singing television reality show is judge by Salil Kulkarni, Bela Shende and Prashant Damle. While popular TV actress Hruta Durgule is the host of this TV show.

Among the talented people, Astad Kale, Yashoman Aapte, Swanandi Tikekar, Girija Oak are the finalist of the first season of the Singing Star. This contestant will compete in finals. It will be interesting to see which contestants will win the singing television reality show.

While you can catch the entertaining broadcast of a singing star on online at anytime and anywhere. Sony Liv the official website and app are providing the online broadcast of the show.

Stay tuned with us to get latest updates from the television world. Also, don’t forget to check out audition updates upcoming television reality show.