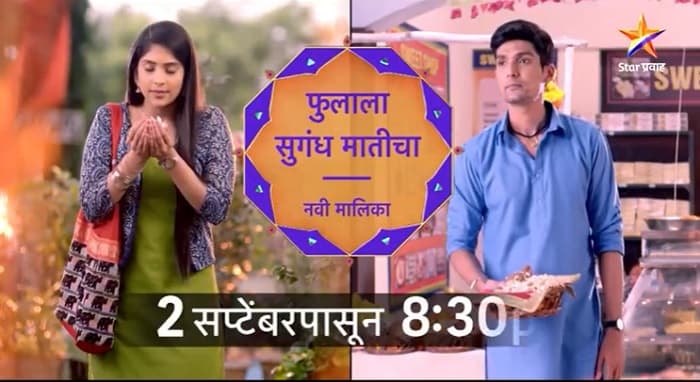 Star Pravah is gearing up to launch a new TV show very soon. The upcoming TV shows on the channel is titled as Phulala Sugandhga Maticha. The TV show will be a romantic family drama and it will feature a very interesting love story. Check out complete details about the starting date and broadcasting details of the show below. Also, find out more information related to the Star Pravah Phulala Sugandh Maticha Start Date 2020, Cast, Story, Promo.

Recently Star Pravah has surprised their fans by announcing two new tv show. Phulala Sugandha Maticha is one of them. the TV show will be Marathi version of popular Hindi TV show Diya Aur Baati. Harshad Atkari and Samruddhi Kelkar will be playing the lead roles in the show.

The TV show will feature a story of a well-educated girl who aspires to become IPS officer and 8th pass Boy who runs mithai shop. Though this tv show is Marathi version of popular Hindi TV show. It will have its own rural touch. Fans are excited to watch this upcoming TV show on the channel.

Harshad Atkari is roped in to play the male lead role in the show. While Samruddhi Kelkar will be playing the female lead in the show. Harshad Atkari took a break from television to focus on his health. And now the actor will be back on screens after a gap of 7 years. He has been part of the hit TV shows like Durva, Anjali and Sare Tujhyach Sathi.

Phulala Sugadha Maticha will hit TV screens on 2 September. the TV show will broadcast on every Monday to Saturday at 8:30 p.m. only on Star Pravah. the online broadcast of this TV show will be available on Hotstar’s official website and app. You can also download Hotstar app from the Google Play Store.

Stay tuned with us to get the latest updates from new TV shows. Also, don’t forget to check out the audition update of the upcoming television reality show