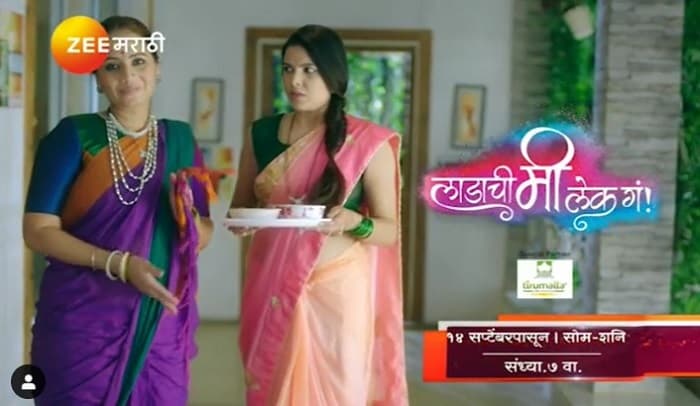 Ladachi Mi Lek Ga is the new and upcoming show on the Indian television network. It is going to be a Marathi daily soap. The show will be telecasting on the popular Marathi channel ZEE Marathi. Check out ZEE Marathi Ladachi Mi Lek Ga Start Date, Cast, Schedule, Story, Promo.

ZEE Marathi has given us many hit and popular shows to date. Ladachi Mi Lek Ga is another new show coming up on the channel soon. The promo of the show is out and the show will be starting soon this September!

The cast of the story will be having two female lead roles. The popular Marathi actress Mitali Mayekar will be in the female lead of the show.

She is very well know for her work in the Marathi industry. Not just television shows the actress has been a part of the popular Marathi films too.

The other female lead of the show will be having Smita Tambe. Smita Tambe is another popular name in the industry. She has not only worked with Marathi films but also with Hindi films.

It is going to be an amazing to the duo in the show.

The show will be starting soon this Spetember! Ladachi Mi Lek Ga will be telecasted from September 14, 2020.

The telecasting time for the show will be at 7 PM. Ladachi Mi Lek Ga will be telecasted from Monday to Saturday only on the ZEE Marathi.

The story of the show is yet to be out. As per the promo shared by the channel we will be seeing Smita Tambe in the boss lady role.

Whereas Smita Tambe plucks the rose from the plant crushes it and takes the smell.

The promo of the show seems to be very promising.

The show will soon starts its telecasting on ZEE Marathi.