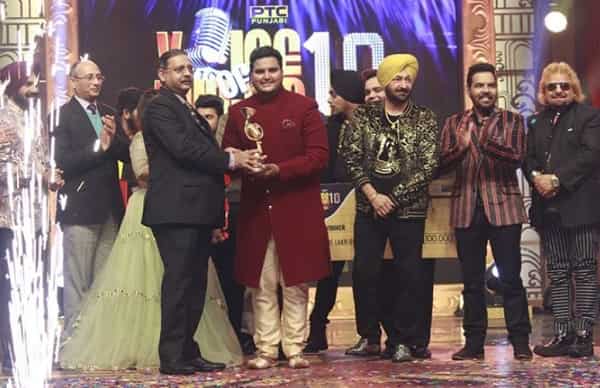 Voice of Punjab is an Indian musical show. Which comes in the Punjabi Language.this successful show has completed their 7th season successfully. And now they are totally ready to come with the 8th season. Voice of Punjab has broadcasted on the PTC TV channel. And its 8th season Also telecast on the same channel. Check out PTC Punjabi Voice of Punjab Winner Name, Runner-up and Prize Money.

Voice of Punjab has reached on a global level. The show has got a huge positive response. And wide fan following. This show gives the best platform for all Punjabi talents. And have entertained people with their impressive performances.

During their, all-season show has found some very talented singers. So here is the list of all Winners of Voice of Punjab singing reality show.

Kumar and Parmjeet Kaur are the winners of the first-ever season of the  Voice of Punjab. Winners have awarded an attractive amount of price. And Music contract with the channel.

The second season of the voice Punjab Started in 2011. Ranjit Bawa from Chandigarh. And Pradeep Singh was from Bhatinda announced as the winner of the second season.

Anantpal Singh from Ferozpur. And Nimritpal Kaur from Gurdaspur won the title of Vice Punjab Season three. The winner awarded the car. And  Contract for the music album. Which has launched by Vanjali Records?

The voice of Punjab season 4 brings back Sachin Ahuja, Master Saleem, and Shazia Manzoor as judges to pick the best from the overly talented contestants. The auditions for the  4th season were not only conducted across India. But also in the united kingdom and Canada. The contestant came from all over the world. The season has hosted by Sahil and Gurjit.

The season was highly popular. Finally, Deepesh Rahi has announced the winner. Earlier Ptc used to announced, two winners. One used to be female. And other oner used to be male.

Neha Sharma from Kapurthala has declared as the winner of the 5th season of the Vop.1st runner-up was sadhu Singh from Batala. While Simran Singh was the second runner-up.

Sonali Dogra won the 6th season of the show. And she was awarded 1 lakh rs cash price. And one car.

After season 7, Gurkirat Kaur is the winner of the PTC Punjabi Voice of Punjab season 8. Sachin Ahuja, Roshan Prince, and Miss Pooja are judges of the season while hosting by Gurjit Singh and Half by Sahil Vedoliyaa with Gurjit Singh.

Voice Of Punjab 9 Winner: Gourav Koundal from Bilaspur grabbed the Voice Of Punjab season 9 title. He won Rs 1 lakh cash prize along with getting an opportunity of recording a song with PTC Records.

Runner-up: Anoop Dhari from Jalandhar is the first runner-up. He gets Rs 50k cash prize. Sukhpreet Kaur stands at No 3. She gets Rs 35k as the cash prize.

After the great victory in the previous past season, the show has come with a new season. While the finale was aired on 8th February 2020. Bal Khurd village of Amritsar boy Sunny Bal is the winner of the show. While Gursewak Singh was the first runner-up and Rahul Verma is a second runner-up.

Sachin Ahuja, Miss Pooja, Rosshan Prince, Kanth Kaler, and Malkit Singh were the judges of the finale. Baljeet Kaur Johal and Gurjeet Singh was the host of the season.

After the Season 10, the biggest singing show of Punjab started their new season auditions. But Due to the Covid-19 the audition not conducted. So did not get any update from the Organizer.

But Voice of Punjab Season 11 audition resume soon online. When any update will get from the source, we will update on the audition page.