Here is Punjab De Superchef Winners Name of all season 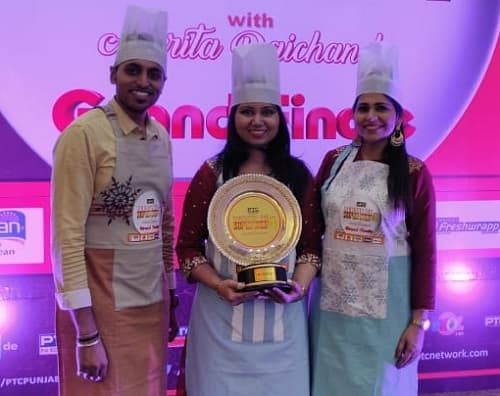 PTC Punjab de superchef is one of the popular cooking show in Punjab. The show broadcasted on the PTC Punjabi TV network. Punjab de super chef has always promoted Punjabi cousins. And has appreciated home cooking. The third season of the show is all set to come back on the television.  The show has already co melted there two seasons successfully. During both of the season, Punjab de super chef has made a common home cooker to a popular chef in Punjab. Check the PTC Punjabi Punjab De Superchef Winner Name list and Prize Money.

Here is Punjab De Superchef Winner Name of all season

Master chef Sokhi is one of the best chefs in India. The chef has appeared in many cooking shoes on big food networks. So, here is the list of the winner from the past season of the Punjab De SuperChef.

Balvinder Singh was the winner of the PTC Punjabi Punjab De Superchef season 1 title. She has awarded Rs 10,000 winning prizes and some cooking materials. Balvinder Singh, she has from Ludhiana, Punjab.

The winner name of the season is Sakshi Batra. Sakshi has awarded the grand winning prizes. and some useful stuff in the cooking.

This year chef Harpal Singh Sokhi was the judge of the Punjab de super chef season 3. They also shared useful tips in the kitchen with the audience. 3  of the show was very interesting.

Prerna Khurana was 1st runner who came from Ludhiana while and the 2nd runner-up was Maninder Kaur Sandhu, he was from Amritsar.

After the 3rd successful season, the show back with the new season. If you think you have a hidden culinary talent, then don’t wait and share your entries here.

After the Registration, the show was started on PTC Punjabi, after the few months its grand finale aired on 19th April 2019. Ludhiana girl Vandana Gupta was the winner of season 4. While Hitesh Nakra from Hoshiarpur was the first runner-up and Tina Matta from Ludhiana was the second runner-up.

After the fourth season, the show was started new season Registration and now the show is running. The grand finale will be aired on PTC Punjabi TV channel.

Neeru Pathak is winner of the Punjab De Superchef Season 5 Winner in 2020.

After the Season, the punjabi Cooking Show is back with new season. And now it’s auditions and Online Registration going from home. So if you want to participate in this show send your entries here.

The winner of the show will announced on Grand Finale. So stay truned for the latest updates.