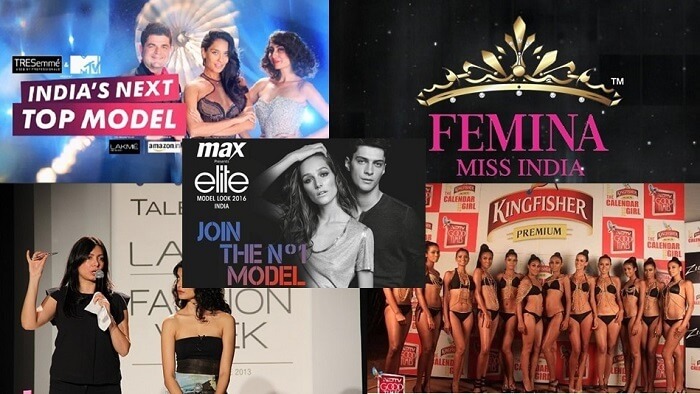 A modeling is a person with a role either to promote, display, or advertise commercial products. Who serve as a visual aide for people who are creating works of art or to pose for photography. Here some popular model Aishwarya Ray Bachan, Deepika Padukone, Priyanka Chopra, Urvashi Rauthela and more. See below Some Top modelling contest, listed in below, which are the held in India every Years. It also features articles on celebrities and cultural facets of Indian women. The first ever Femina Miss India pageant was held in the year 1964.

Lakme fashion Week is an Indian modeling contest show. It is annual fashion event that takes place in Mumbai. It is considered a premier fashion event in India. Lakme Fashion is Sponsored By IMG Reliance and The Title Sponsor is Lakme. The First event is started In 1999 With international models Naomi Campbel, and Indian film stars Deepika Padukone, Malaika Arora khan, Arjun Rampal. Taken Part In Lakme Fashion Week. The First contest was is started In 1999 with international models Naomi Campbel, and Indian film stars Deepika Padukone, Malaika Arora khan, Arjun Rampal was taken part in the contest. Only 1 Model Get Chance To Win Kingfisher Supermodel. The Creator of the show was Vijay Mallya along with  Kasbekar.

Elite Model Look is an International Fashion Modeling Event. It is started from 1983 and held every year. The show held by Elite Model Management, an international model management group. It is used to discover and launch female fashion models in the international fashion marketplace. The Show is organized in 70 Countries whole the World. The age required for the show between 14 to 22. Elite Model Look Give Chance to Represent their Country in the World on Finale of Elite Model Look.

India “Next Top Model is an Indian modeling contest.The Show is started on 19th July 2015 with 1st season aired on MTV. The Show is Copy Write Of the America’s Next Top Model. The hosted By Anusha Dandekar and Judge was the season was Lisa Hayden and Dabu Ratnani. Thirteen finalists were chosen to compete for the show. Danielle Canute was the winner of India’s Next Top model Season 1. who has the from Mumbai and she completed 18 years Old.